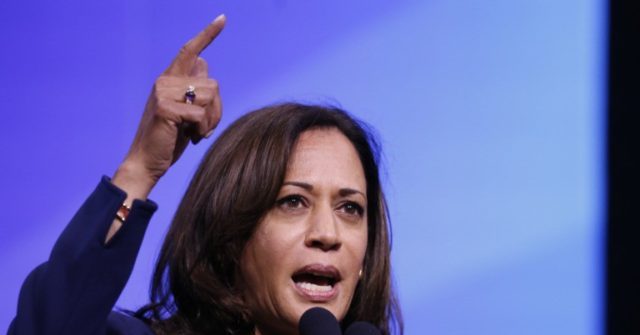 Sen. Kamala Harris (D-CA) on Friday told President Donald Trump to “keep George Floyd’s name out of your mouth” after the president expressed hope that “George is looking down right now and saying this is a great thing that’s happening for our country” in “terms of equality.”

“.@realDonaldTrump, keep George Floyd’s name out of your mouth until you can say Black Lives Matter,” Harris wrote on social media, sharing a clip of the president speaking in the White House’s Rose Garden.

.@realDonaldTrump, keep George Floyd’s name out of your mouth until you can say Black Lives Matter.pic.twitter.com/YJ6wPw0Hto

Trump delivered remarks on Friday following a unexpectedly positive jobs report but used the address to speak on George Floyd’s death and nationwide demonstrations against police brutality — some of which have descended into riots, looting, and violence against police.

“Equal justice under the law must mean that every American receives equal treatment in every encounter with law enforcement, regardless of race, color, gender, or creed,” Trump said. “They have to receive fair treatment from law enforcement.”

“We all saw what happened last week. We can’t let that happen,” he said of Floyd’s death, which sparked national outrage thanks to a bystander’s video showing a police officer pressing his knee into the man’s neck for nearly nine minutes, even after he stopped pleading for help and passed out.

“Racism is evil, and those who cause violence in its name are criminals and thugs, including the KKK, neo-Nazis, white supremacists and other hate groups that are repugnant to everything we hold dear as Americans,” he said during the eruption of violence in Charlottesville in 2017.

The Trump administration has championed minorities throughout its first term, overseeing the lowest recorded black and Hispanic unemployment rates. The administration also played a part in establishing opportunity zones and restoring funding to historically black colleges and universities (HBCUs).

The section of 16th street in front of the White House is now officially “Black Lives Matter Plaza”. pic.twitter.com/bbJgAYE35b