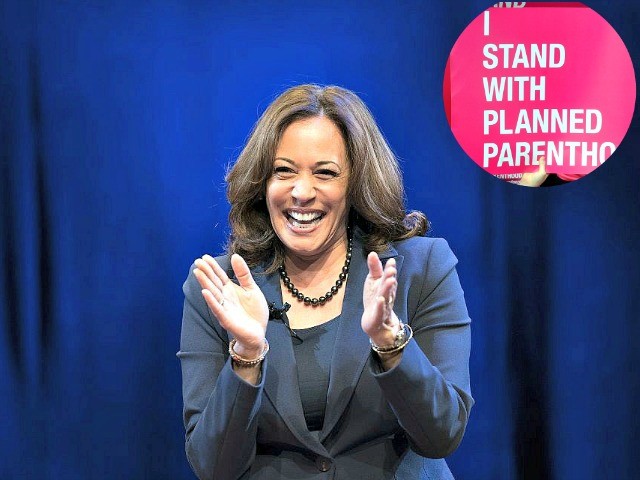 The website launched for the presidential campaign of Kamala Harris insists the California senator is an “advocate for the voiceless and vulnerable,” yet Harris’s political career has been entwined with abortion giant Planned Parenthood from the beginning.

David Daleiden, project lead with the Center for Medical Progress (CMP) – which exposed Planned Parenthood’s alleged profiting from the sales of body parts of babies aborted in the group’s clinics – tweeted last week that Harris’s rhetoric for her 2020 presidential campaign is “a bad joke.”

It’s a bad joke for @KamalaHarris to say she’s running for “truth, justice, decency, equality, freedom, democracy” when she weaponized the powers of law enforcement to attack my 1st Amendment civil rights as a citizen journalist at the bidding of her @PPact donors and backers. https://t.co/ohzYKi2zxU

“[T]o say she’s running for ‘truth, justice, decency, equality, freedom, democracy’ when she weaponized the powers of law enforcement to attack my 1st Amendment civil rights as a citizen journalist at the bidding of her @PPact donors and backers,” he posted.

In 2016, when Harris was still California’s attorney general and a candidate for the U.S. Senate, pro-life millennial organization Students for Life of America (SFLA)  held a “#KorruptKamala” event, during which they protested what they saw as Harris’s abuse of power.

Harris had received thousands of dollars in contributions from Planned Parenthood for her re-election campaign – and then her Senate campaign – and subsequently her office seized Daleiden’s personal property.

“I was proud to stand with the pro-life generation today and call for the resignation of California Attorney General Kamala Harris, a corrupt politician bought and paid for by Planned Parenthood and their allies,” said Kristan Hawkins, SFLA president, in a statement to Breitbart News at the time.

“It wasn’t until AG Harris was called out in the media for her lack of urgency when it came to investigating David Daleiden that she sent a small army of agents to raid David’s one-bedroom apartment,” Hawkins said.

A pro-abortion rights Los Angeles Times column by Robin Abcarian in March 2016 criticized Harris for dragging her feet on bringing Daleiden to justice.

“So who is next?” asked Hawkins. “What group or individual will Harris exact political revenge upon next? This is exactly the kind of corrupt behavior from politicians Americans are fed up with. It’s time for AG Harris to resign.”

Following the raid on Daleiden’s apartment, the journalist released the following statement:

Today, the California Attorney General’s office of Kamala Harris, who was elected with tens of thousands of dollars from taxpayer-funded Planned Parenthood, seized all video footage showing Planned Parenthood’s criminal trade in aborted baby parts, in addition to my personal information. Ironically, while seizing my First Amendment work product, they ignored documents showing the illicit scheme between StemExpress and Planned Parenthood. This is no surprise–Planned Parenthood’s bought-and-paid-for AG has steadfastly refused to enforce the law against the baby body parts traffickers in our state, or even investigate them–while at the same time doing their bidding to harass and intimidate citizen journalists. We will pursue all remedies to vindicate our First Amendment rights.

In September 2016, emails obtained by the Washington Times showed that Harris’s office collaborated with Planned Parenthood to produce legislation that targeted Daleiden.

The emails, according to the Times, were accessed through a public records request, and revealed conversations between officials of Harris’s office and Planned Parenthood regarding legislation that would criminalize undercover journalists for publishing and distributing recordings of private communications with abortion providers.

According to the Times:

The documents are another indication of Ms. Harris‘ close relationship with Planned Parenthood and call into question the impartiality of her ongoing investigation of Mr. Daleiden, legal experts said.

The emails show Beth Parker, chief legal counsel for Planned Parenthood Affiliates of California, sending multiple drafts of AB 1671 to Jill Habig, who was at the time special counsel to the attorney general.

“Attached is the language for AB 1671, proposed amendments to Penal Code section 632,” Ms. Parker wrote in an email marked March 8. “I look forward to your thoughts about this.”

Ms. Parker sent a revised draft of the legislation to Ms. Habig on March 16. “Here’s the rewrite of the video tape bill,” she wrote. “Let me know what you think.”

“It is common to work on legislation pending before the California state legislature — the attorney general’s office does occasionally weigh in,” Cooley said, according to the Times. “It is extraordinary to collaborate with a particular entity on what is clearly legislation of specific benefit to them.”

In a statement sent to Breitbart News at the time, Rose said:

As attorney general, Kamala Harris is supposed to represent the people and uphold the law. Instead, these emails show Harris is more interested in brazenly attacking the First Amendment and helping Planned Parenthood hide human rights abuses and potentially illegal and abusive activity from public view.

Harris holds a 100 percent voting record in favor of issues lobbied for by Planned Parenthood and NARAL, and a 0 percent record with the National Right to Life Committee and the California Pro-Life Council.