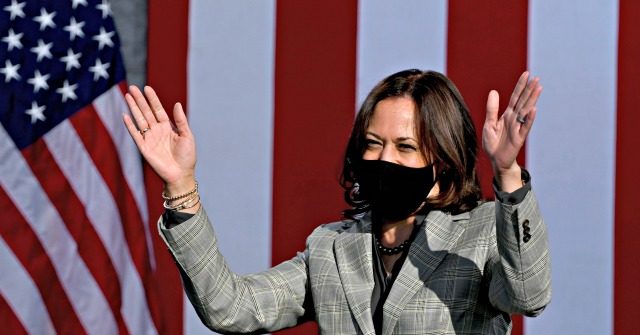 Sen. Kamala Harris (D-CA), the Democrat nominee for Vice President, wrote in an op-ed published by the Deseret News on Sunday, that her running mate, former Vice President Joe Biden, would “restore” values in public life and that President Donald Trump’s “callousness and cruelty” would end.

“Are we, as a nation, living our values when we separate babies from their mothers? When we desecrate the planet God has entrusted to us? When in the wealthiest country in the world, we allow millions of children to go hungry?” Harris wrote.

Harris arrived Monday in Salt Lake City, Utah, for Wednesday’s vice presidential debate ,where she will face off against Vice President Mike Pence. The op-ed seems to be a pitch to Mormon voters not just in Utah, but in swing states like Arizona and Nevada, which both boast sizable Mormon populations.

Despite Harris taking the tone of someone protecting babies from getting separated from their mothers in this op-ed, she is a strident supporter of abortion and has a consistent record of being one of the most pro-abortion Democrats in Congress.

Harris has a 100 percent rating with Planned Parenthood, which, according to its 2019 annual report, aborted 345,672 babies in that fiscal year. Planned Parenthood has endorsed the Biden-Harris ticket for president and vice president.

Harris voted against the Born-Alive Abortion Survivors Protection Act, which would have required babies who survived abortion to be given lifesaving treatment, including nutrition.

Harris nonetheless in the op-ed wrote about religious influences in her own life, discussing herself and her sister growing up:

When my sister Maya and I were growing up, we lived two doors down from Regina and Arthur Shelton, a wonderful couple who ran a day care and after-school program out of their home. Because our mother was raising us mostly on her own, and was still at work when we came home from school in the afternoons, we would go straight to the Sheltons’ house. Mrs. Shelton became a second mother to us. We became family to each other.

Maya and I loved singing in the children’s choir at the 23rd Avenue Church of God. On Sundays, our mother would get us dressed in our Sunday best and send us off to church, piled in with the other kids in the back of Mrs. Shelton’s station wagon. There, my earliest memories of the Bible’s teachings were of a loving God, a God who asked us to serve and stand up for others, especially those who were not wealthy or powerful. It was where I learned that “faith” is a verb — that we must live our faith and show faith in action.

This is a value shared by people of all beliefs. I saw it as a child when my mother — an immigrant from India — took us to Hindu temples. I see it in my husband, Doug, and his family’s Jewish traditions. I see it in Joe Biden, whose deep Catholic ethic animates his commitment to “the least of these.”

Harris also in the piece praised the Mormon Church’s “commitment to serving others, to doing his work here on Earth, is a moving example of faith in action” and said that example “has always guided my life’s work, from the time I was a young lawyer all the way to the United States Senate and now as a nominee for vice president of the United States.”

Beyond criticizing Trump, Harris criticized what she described as systemic problems in the country as a whole, citing “income inequality” and “structural racism.”

Harris concluded by promising the man with the right values is Biden.

“Those values — kindness, decency, acceptance, generosity, unity — bind us together as people across all faiths and as Americans,” Harris wrote. “Those are the values that, as president, Joe Biden will restore in our public life.”