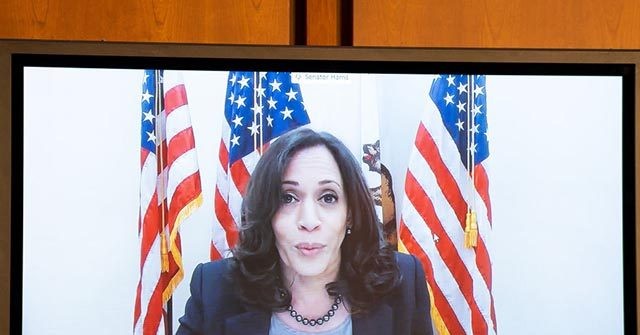 Harris, who sits on the Senate Judiciary Committee, spoke during the third day of Barrett’s confirmation hearings on Wednesday. During her remarks, the lawmaker lambasted the proceedings, arguing that President Donald Trump and the GOP were rushing to cement a conservative majority on the nation’s highest court during a time of national crisis.

“These proceedings, I believe, lack legitimacy in the eyes of the people of our country,” Harris said. “Americans are right now suffering from a deadly pandemic, and we are also suffering a historic economic crisis.”

“We are also in the middle of an election, more than 12 million Americans have already voted,” the senator added. “The American people want whoever wins this election to fill this seat, my Republican colleagues know that I believe.”

The Democrat vice presidential nominee further said the confirmation hearings had done little “to alleviate concerns why this nominee was chosen and why this is being rushed.”

“To be candid, people are very scared,” Harris said. “They are scared that allowing President Trump to jam this confirmation through will roll back rights for generations.”

“Sadly, my Senate Republican colleagues are doing, I believe, great harm with this illegitimate process,” she added.

Harris’s arguments echo those that Democrats have been making since Trump nominated Barrett to fill the Supreme Court seat vacated by the passing of Justice Ruth Bader Ginsburg.

Democrats originally tried to obstruct the confirmation process until January, in hopes that former Vice President Joe Biden, their party’s White House nominee, would win the upcoming election and be able to propose his own candidate. That strategy, however, failed after the Senate Republican majority opted to stand united behind Trump’s nominee.

Since then, some Democrats have threatened that if Barrett is confirmed and Biden wins the general election, they will move to add more justices to the Supreme Court—a tactic known as court-packing. Biden, himself, has remained vague on the topic, refusing to state one way or another.