Vice President Kamala Harris attended the inauguration in Honduras Thursday of socialist President Xiomara Castro, whose husband, Manuel Zelaya, has a history of antisemitic statements and also attempted to rig a referendum in 2009.

Zelaya scapegoated Jews for his removal from power in 2009, claiming that he was targeted by “Israeli mercenaries.” His statements were condemned by the Anti-Defamation League at the time, though Democrats embraced the left-wing leader. 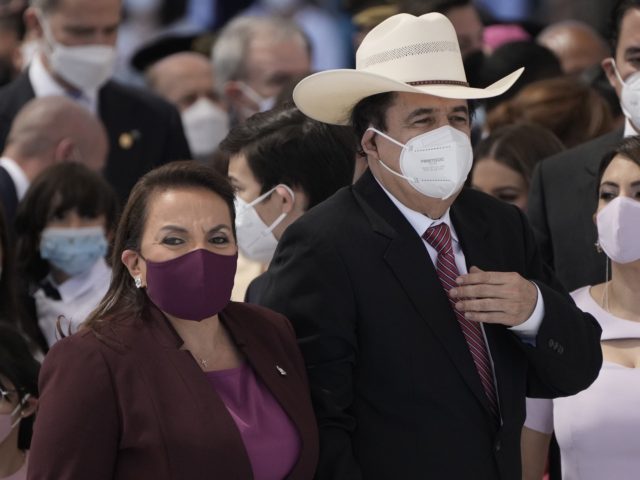 As Breitbart News recounted in 2013:

In June 2009, then-President Manuel Zelaya was removed from office by the Honduran military in accord with the Honduran constitution after he attempted to rig a constitutional referendum. Democrats, including then-Senator (now Secretary of State) John Kerry and Rep. Jan Schakowsky of Illinois, charged that the radical, antisemitic Zelaya had been removed in a coup, and supported his efforts to return to power.

The Obama administration embraced Zelaya (literally), attempting to intervene and punishing Hondurans by suspending visa services. President Obama supported Zelaya volubly, declaring: “We do so because we respect the universal principle that people should choose their own leaders, whether they are leaders we agree with or not,” and also that “it would be a terrible precedent if we start moving backwards into the era in which we are seeing military coups as a means of political transition rather than democratic elections.”

Thursday happens to be International Holocaust Remembrance Day, as recognized in 2005 by the United Nations.

Harris tweeted about the Holocaust, vowing “to combat antisemitism and hate wherever it [sic] exists.”

As we reflect on the resilience of the Jewish people, we must continue to combat antisemitism and hate wherever it exists.https://t.co/T5CyJSpj0P

She then tweeted, without irony, about her visit to Honduras, failing to mention Zelaya’s history of antisemitism:

Today I am traveling to Tegucigalpa, Honduras to attend the inauguration of President Xiomara Castro. Our relationship with Honduras is an important one. We will meet later today to discuss deepening our cooperation across a broad range of issues between our two nations.

Honduras is one of the Central American states from which migrants to the U.S. are coming in droves. Harris has been tasked with dealing with the “root causes” of migration, though critics note she has not achieved much on the issue.