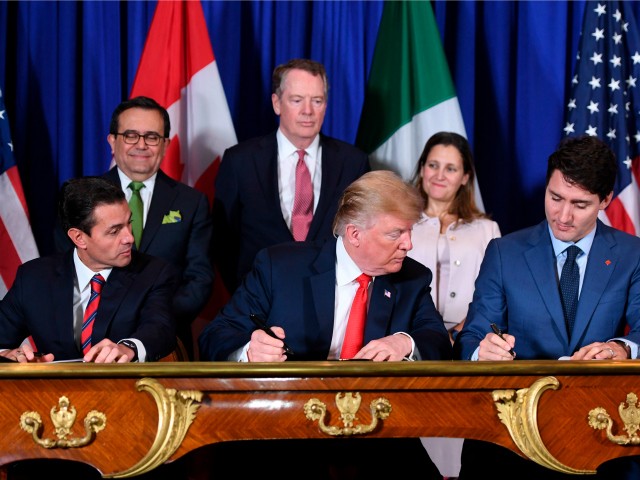 Trump spoke first at the signing ceremony for the three presidents to sign the United States-Mexico-Canada Agreement (USMCA) — a revamp of the North American Free Trade Agreement (NAFTA), based on Trump’s urging.

Trudeau — with whom Trump has had a rocky relationship — spoke next and conspicuously avoided calling the new agreement by its name, “USMCA,” a name that Trump came up with.

Instead, he referred to the new agreement as the “new free trade agreement,” spoke of “modernizing NAFTA,” referenced the benefits of “NAFTA,” and finally referred to it as a “new agreement.”

Nieto spoke after Trudeau. He referred to the agreement as the “USMCA” twice in his remarks. It was Nieto’s last day as president, and he touted the benefits of the new agreement.

Nieto appeared to fidget with his pen until Trump was ready to sign the agreement. Trump leaned over to him first and said encouragingly, “Let’s go.”

There was a question as to if Trudeau would show up to the signing ceremony. He and Trump have had a tense relationship, stemming from the G7 meeting in June. Trump accused Trudeau of holding a press conference that bashed him right after he left the summit.