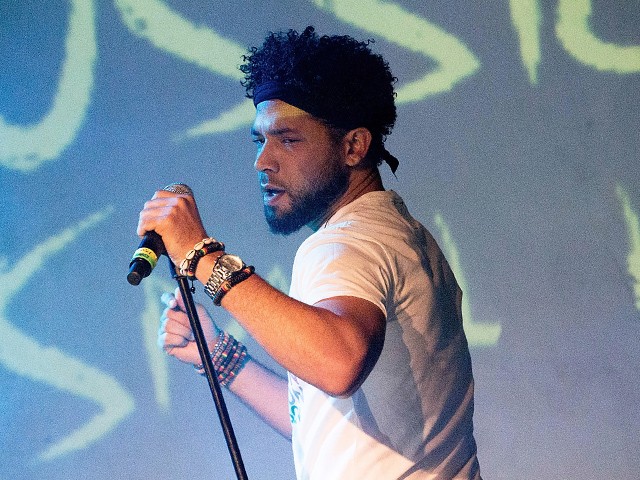 Actor and singer Jussie Smollett returned to the stage in Los Angeles on Saturday night, days after he claimed to be the victim of an allegedly racially charged attack on the street in Chicago.

Addressing the Troubadour nightclub in West Hollywood, with a crowd that included Congresswoman Maxine Waters, filmmaker Lee Daniels, and actor Wilson Cruz., the Empire star declared: “I had to be here tonight, y’all. I can’t let the motherfuckers win.”

“I have so many words on my heart,” Jussie Smollett said. “The most important thing I have to say is thank you so much and that I’m okay. I’m not fully healed yet, but I’m going to. And I’m gonna stand strong with y’all.  l will always stand for love. I will never stand for anything other than that. Regardless of what anyone else says, I will only stand for love. And I hope that you all will stand with me.”

In his statement to police following the incident on Tuesday morning, Smollett alleged that he was approached by two individuals who hurled racist and homophobic slurs at him. One of the men allegedly hit him in the face before pouring an “unknown substance” over his head and wrapping a noose around his neck.

Since the racially motivated attack, @JussieSmollett hit the stage for his #SeanHealyPresentsJussieSmollett in LA with an emotional message. pic.twitter.com/MVBnKdq1pZ

However, many have cast doubt on the details surrounding the attack, including the seriousness of Smollett’ss injuries and whether he was subject to racist and homophobic abuse.

“Just because there has been a lot of stuff said about me that’s absolutely not true,” he said. “I’m sure my lawyer’s sitting up there like. ‘No, Jussie, no! No! Shut the fuck up and sing.’

“I was bruised but my ribs were not cracked; they were not broken,” he explained. “I went to the doctor immediately… I was not hospitalized. Both my doctors in L.A. and Chicago cleared me to perform, but said to take care, obviously. And above all: I fought the fuck back.”

Look at those bruised or broken ribs go! @JussieSmollett on stage now in LA. #chicago https://t.co/R73U0yE8a4

After reviewing hundreds of hours of footage, local police have so far failed to identify any suspects for the attack, while it emerged on Friday that Smollett had refused to turn over his cell phone records to investigators. Police later released blurry images of two persons of interest in the alleged attack, who are only seen on the opposite side of the street in the surveillance footage
“I don’t even care to name any names,” he added. “The hateful rhetoric that gets passed around, it has to stop. But guess what, it stops with the people that believe in love.”