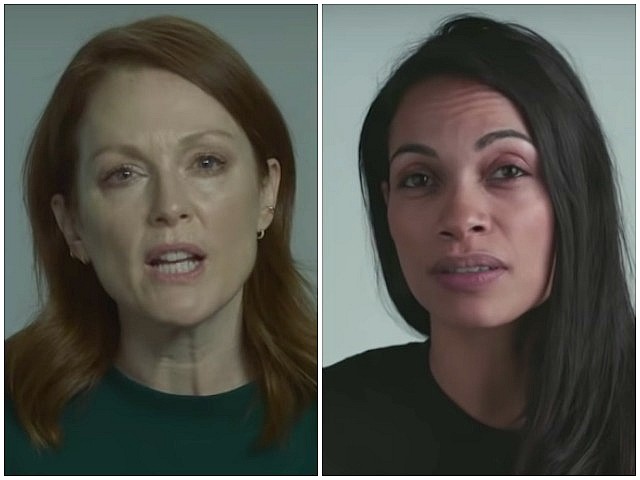 Hollywood stars Julianne Moore and Rosario Dawson teamed up to endorse Democrats in a midterm vote video taking the Trump administration to task over its immigration policy and claiming that President Donald Trump is violating “international law” by “imprisoning children.”

The ad was made for the leftist group We Stand United, an organization formed by activist actors Mark Ruffalo, Bruce Cohen, Fisher Stevens, Julia Walsh, Marisa Tomei, Christina Papagjika, Rebecca Chaiklin, Schele Williams, among others. The group has worked with other hard-left organizations headed by activists such as Michael Bloomberg and Al Sharpton.

In the latest ad, Moore and Dawson rip into the Trump administration accusing President Trump of “violating international law” and “putting children in jails.”

According to a press release, the video exclaims that “Trump violated international law by detaining children and families who were legally seeking asylum, cruelly separated families and placed the children in cages, and that when released from detention centers, asylum-seekers are left without food or money. Furthermore, many immigrants were packed into ‘ice boxes’ where the temperature is kept at 56 degrees, resulting in many of them getting sick.”

Of course, all the claims in the ad are left-wing propaganda. Indeed, as the video heaps all the blame on President Donald Trump, the fact is that these “cages” have been in use for years and even Barack Obama’s administration employed the policy of separating children from adults illegally entering the United States.
In June of 2018 leftists began sharing photos on social media showing illegal alien children detained in fenced immigration facilities. But leftists incorrectly claimed the photos depicted children detained during the Trump administration. It turned out that all the photos then being blamed on Trump were actually taken in 2014 during the Obama regime.

Obama had enforced this policy at least as far back as 2014.

“In the summer of 2014, when the number of families and unaccompanied minors apprehended at the border began to sharply increase, the Obama administration began putting hundreds of families into immigration detention facilities. Critics called the detention centers overcrowded, dirty and ill-equipped,” The L.A. Times reported on June 19.

Further, the policy employed to separate children from illegal aliens storming over the border was put in place in the late 1990s during the Bill Clinton-era and has been in place ever since and employed at varying levels of intensity.

Finally, one of the main reasons for the policy is to stop the human trafficking of children. One of the reasons children are separated from the adults that bring them into the country illegally is because these children are often used as shields by people who turn out not to be the children’s parents. Indeed, during the Trump administration arrests for human trafficking have surged.

“Through late June 2018, human trafficking arrests for the year approached 6,000. That’s nearly double the year prior (which itself marked an all-time high), and triple the year before that,” Political Insider reported in July. “Human trafficking-related arrests never topped 2,000 under the Obama administration and were a paltry 300 in 2010.”