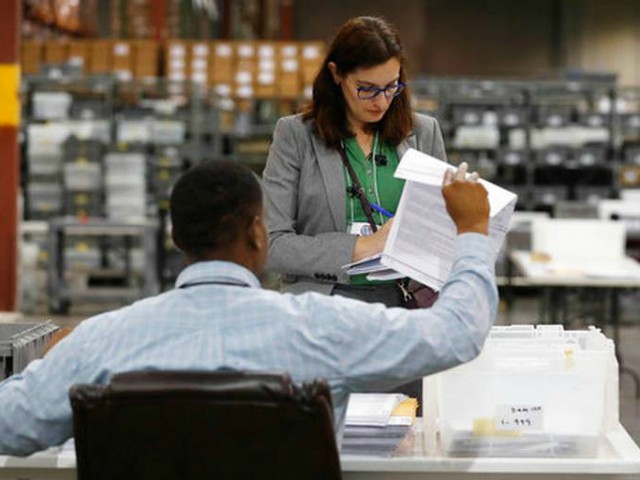 A federal judge on Thursday ruled against a request to extend the deadline for recounts in Florida’s U.S. Senate and governor midterm races, according to reports.

“We have been the laughingstock of the world, election after election, and we chose not to fix this,” Walker said in court.

Walker vented his anger at state lawmakers and Palm Beach County officials, saying they should have made sure they had enough equipment in place to handle this kind of a recount.

The overarching problem was created by the Florida Legislature, which Walker said passed a recount law that appears to run afoul of the 2000 Bush v. Gore decision, by locking in procedures that do not allow for potential problems.

Florida’s 67 counties faced a 3:00 p.m. Thursday deadline to finish recounts that could determine the next senator and governor in one of America’s top political battlegrounds.

Palm Beach County’s election supervisor previously warned that the county will not be able to finish on time.

Susan Bucher defended her office Thursday morning, saying the incomplete recount was not “for lack of human effort.”

Bucher explained that the elections office in Riviera Beach shut down Wednesday night because “when you work about 45 hours in a row, you have to let people sleep.”

Bucher says she believes her office did everything it could despite not completing the U.S. Senate race recount.

She blames aging equipment for the delays in meeting Thursday’s deadline for machine recount results.

Six election-related lawsuits are pending in Tallahassee. Earlier Thursday, Walker ordered that voters be given until 5:00 p.m. Saturday to show a valid identification and fix their ballots if they have not been counted due to mismatched signatures.

State officials testified that nearly 4,000 mailed-in ballots were set aside because local officials decided the signature on the envelope did not match the signature on file. If those voters can prove their identity, their votes will now be counted and included in final official returns due from each county by noon Sunday.

Earlier Thursday, Florida Democrats called on voters to submit absentee ballots after Election Day with altered forms made to appear as though they were done prior to the legal deadline. Party officials hope a judge will allow the votes to be counted. As Breitbart News’s Joel Pollak reported, critics believe the move would constitute potential election fraud.

Naples Daily News’s Ana Ceballos reported on the specifics of the plan:

A day after Florida’s election left top state races too close to call, a Democratic party leader directed staffers and volunteers to share altered election forms with voters to fix signature problems on absentee ballots after the state’s deadline.

The altered forms surfaced in Broward, Santa Rosa, Citrus and Okaloosa counties and were reported to federal prosecutors to review for possible election fraud as Florida counties complete a required recount in three top races.

But an email obtained by the USA TODAY NETWORK-Florida shows that Florida Democrats were organizing a broader statewide effort beyond those counties to give voters the altered forms to fix improper absentee ballots after the Nov. 5 deadline. Democratic party leaders provided staffers with copies of a form, known as a “cure affidavit,” that had been modified to include an inaccurate Nov. 8 deadline.

One Palm Beach Democrat said in an interview the idea was to have voters fix and submit as many absentee ballots as possible with the altered forms in hopes of later including them in vote totals if a judge ruled such ballots were allowed.

In his ruling, Walker stated he was concerned that some counties may not complete their work by the deadline. But he said there is a lack of information about when Palm Beach County would wrap up its work.

Walker said he cannot “fashion a remedy in the dark.”

Once the machine recount is complete, state law requires a hand review of races with margins of less than 0.25 percentage points. That almost certainly means another recount in the Senate race, with unofficial results showing Republican Gov. Rick Scott ahead of Nelson by 0.14 percentage points.

Also, the election will not be certified until Tuesday, even though the machine recount may essentially bring a conclusion to the governor’s race, where Republican Ron DeSantis leads Democrat Andrew Gillum by 0.41 percentage points in unofficial results.

Nelson, a three-time incumbent, has defended his legal strategy that resulted in Walker’s ruling, saying in a statement Wednesday that his goal was to “to make sure that every lawful vote be counted correctly in this Senate race, and that Floridians’ right to participate in this process is protected.”

Republicans say in their own lawsuits and motions that Democrats are trying to change the rules after the voting did not go their way.

“We will continue to fight to defend Florida law and uphold the will of the voters,” said Chris Hartline, a spokesman for Scott.

Nelson and Democrats had wanted Walker to order the counting of all mail-in ballots rejected for a mismatched signature, arguing that local election officials are not handwriting experts.

Walker said he could not go along with that suggestion.