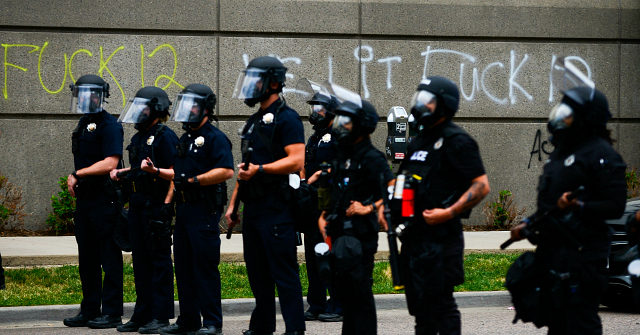 A federal judge in Denver, Colorado, issued an order late Friday night limiting the use of non-lethal projectiles and tear gas at protests, saying that the protesters’ First Amendment rights were more important than protecting property.

“The threat to physical safety and free speech outweighs the threat to property,” U.S. District Court Judge R. Brooke Jackson wrote in her 11-page ruling released Friday, according to the Denver Post.

Jackson’s ruling was handed down after four protesters filed a lawsuit requesting a temporary restraining order against police actions made with brute force.

The lawsuit filed Thursday in Denver District Court was escalated to federal court.

“I find that plaintiffs have established a strong likelihood that defendant violated plaintiffs’ First Amendment right to free speech,” Jackson wrote in the ruling.

The court has ordered the police at protests to refrain “from employing chemical weapons or projectiles of any kind against persons engaging in peaceful protests or demonstrations.”

Denver Police announced Friday night that the police department “will comply with the judge’s directions, many of which are already in line with our community-consulted Use of Force Policy.”

(1/2) #ALERT #Denver – A federal judge issued a Temporary Restraining Order (TRO) clarifying #DPD use of non-lethal dispersant devices. In the meantime, we will comply with the judge’s directions, many of which are already in line with our community-consulted Use of Force Policy.