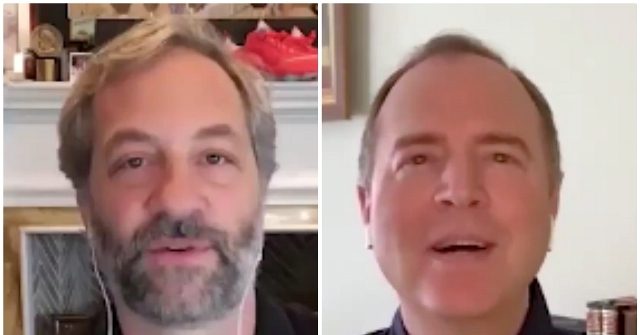 Apatow, who recently called President Donald Trump a “mass murderer,” hosted Schiff in a video posted to Twitter, in which Schiff — once an aspiring screenwriter — touts his “personal brand of comedy,” calling it “subversive, yet relatable.”

Rep .@AdamSchiff attempts humor in this video we made for https://t.co/hYaQsyqaoY.

They have all tools and information you need to register and vote. Link in bio. pic.twitter.com/OLa72WGUas

He then offers an impression of White House communications director-turned-enemy Anthony Scaramucci, Kellyanne Conway, and Rudy Giuliani, all of which sounded the same. Next, he shows how he can “remove” his thumb.

Later, Schiff offers to perform a “TikTok dance” and pretends to play “Chopsticks” on an electric piano. At one point, he insists on being referred to as “Congressman Schiff.”

The gag in the sketch is that Schiff is humorless.

Schiff claimed, falsely, for years that there was “more than circumstantial” evidence that Trump had colluded with Russia during the 2016 presidential campaign. In fact, Democrats worked with foreign sources — including a “sub-source” once suspected of spying for Russia — to manufacture dirt on then-candidate Trump through the discredited “Steele Dossier.”

In 2019 and 2020, Schiff led a failed effort to impeach and remove the president, claiming that Trump had abused his power by asking the Ukrainian president to assist in investigations of former Vice President Joe Biden’s apparent conflicts of interest through his son, Hunter Biden’s role in the corrupt Ukrainian oil company, Burisma.

Concerns about Joe Biden’s role were amplified last week with the release of emails by the New York Post suggesting then-Vice President Biden did, in fact, meet with a Burisma adviser after Hunter Biden arranged a meeting in 2015. Hunter Biden also allegedly arranged meetings between Chinese executives and Communist Party officials with the vice president, according to a report by Breitbart News.