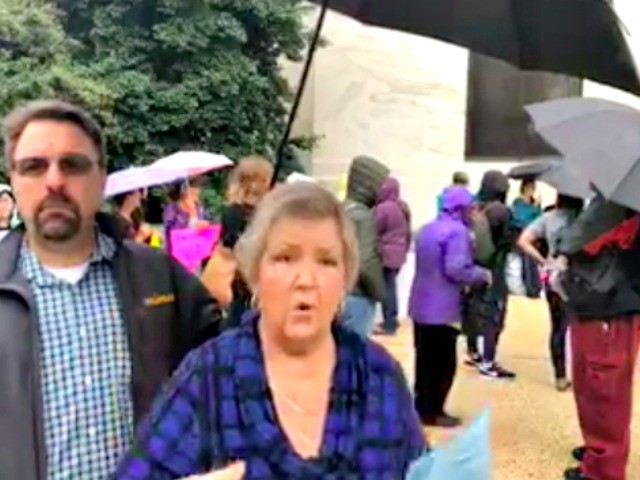 WASHINGTON, DC — Bill Clinton rape accuser Juanita Broaddrick stood in front of the Dirksen Senate Office Building Thursday, pointing to the hypocrisy of Sens. Chuck Schumer, Dianne Feinstein, and Dick Durbin in refusing to even read her allegations in 1999, while pushing for believing the accuser of a Republican Supreme Court nominee in the present day.

“Back in 1999 Sen. Chuck Schumer, Sen. [Dianne] Feinstein, and Sen. [Dick] Durbin refused to read my investigation and record with the independent counsel. Completely refused even [though] they were asked by the committee and the committee said this woman has credible evidence,” Broaddrick told Breitbart News. “I had all the what, who, when, wheres, and how of my rape by Bill Clinton. They refused, Durbin, Schumer, Feinstein, not only didn’t believe mine. They didn’t give themselves a chance to believe it because they refused to read it. That’s disgusting.”

Broaddrick came to Capitol Hill Thursday ahead of the day’s Senate hearing regarding Dr. Christine Blasey Ford’s allegations that Supreme Court nominee Judge Brett Kavanaugh sexually assaulted her when they were in high school over 30 years ago.

Broaddrick’s message for Senators getting ready to vote on Kavanaugh’s nomination was, “They’ve done already what they need to do. They know that these allegations are falling apart by the minute against a very good, honest man and they’re trying to ruin this man all because of politics and I think that’s wrong.”

“I didn’t try to ruin Bill Clinton because of politics, I was just trying to validate a rape,” she added.