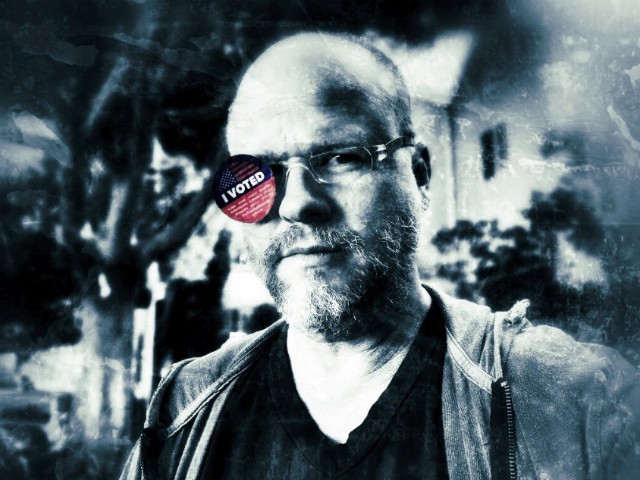 Left-wing Hollywood director Joss Whedon jumped to his Twitter account to urge fans to vote with a strange message about pirates and a hyperbolic claim that it will “save our world.”

Over the weekend, the Avengers director tweeted out a photo of himself with an “I voted” sticker over a lens of his eyeglasses.

“Vote! It… makes you a pirate? I don’t know, I’m not in marketing,” Whedon wrote. “it’s our last chance to save our world from brutality and chaos, how about that. Aaarr.”

Vote! It… makes you a pirate? I don’t know, I’m not in marketing – it’s our last chance to save our world from brutality and chaos, how about that. Aaarr. pic.twitter.com/DUoUE17Lik

One wonders if people in the UK, or Brazil, Japan, or Outer Mongolia think that voting in a U.S. election is an act of “saving our world,” but we can only presume to guess that this “brutality and chaos” Whedon is lamenting is sponsored by Republicans.

We can infer this by Whedon’s other October Tweet in which he celebrated his donation to extreme leftist Stacey Abrams’ campaign to become Governor of Georgia. Whedon said he donated to the flag-burning candidate to “temper our diet of Rich White Whine.”

Abrams lost support recently in Georgia when the state was reminded that in 1992, she attended a protest against the state and personally burned a state flag on the steps of the state capital.
Whedon has his own problems.

In August, a popular Whedon fan website, “Whedonesque,” shut down after 15 years after the Buffy the Vampire Slayer creator’s ex-wife, Kai Cole, accused him of “multiple affairs” with “his actresses, co-workers, fans and friends,” and for abusing her for years.

Also, as Whedon continues to decry the “brutality” he claims emanates from the right side of America’s political aisle, he is not above mocking and ridiculing women who disagree with his own political propaganda. Indeed, he once wished rape on a Republican, indulged gross personal attacks on cancer victims for daring to meet with a Republican, and expressed glee that his own mother was dead because of his hate-filled and skewed view of politics.