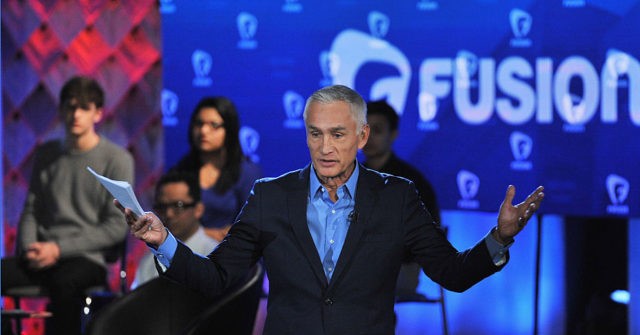 Mexican-born TV personality Jorge Ramos says the American people cannot stop migration and must instead open their homeland’s borders to a huge and endless inflow of migrants.

“They will keep coming; there is no other solution,” he wrote in an April 2 column for the New York Times.

“All the other options — walls, detention facilities, family separation policies, forcing asylum seekers to wait in Mexico, expedited repatriations and mass deportations — have failed,” he claimed, without admitting that his favored president, Joe Biden, has been demolishing President Trump’s successful curbs of border immigration since January 20.

Trump’s curbs were so successful, so complete, that U.S. employers were forced to compete for workers by offering higher wages to recruit blue-collar Americans from other companies, retirement, or high-unemployment areas. “Men at the middle and bottom of the wage distribution saw their wages rise in 2019: a 2.6% increase at the 50th percentile and a striking 5.7% increase at the 10th percentile, along with a 4.2% increase at the 20th percentile,” according to the 2019 yearly report of the left-wing Economic Policy Institute.

Without economic data to support his elitist criticism of Trump, Ramos — and the editors at the New York Times — resorted to insults and declarations of historical inevitability.

Trump’s wage-raising policies are “inhuman and repressive,” said the Mexican-born immigrant, who would gain wealth and status from an inflow of Spanish-speaking TV-watchers.

“The struggle is real, but we know how it has to end, with more legal immigration. As they say in Mexico, “No hay de otra” — There is no other way,” he said.

The “United States should start accepting between one and a half and two million authorized immigrants every year,” he said, without noting that his plan would add one immigrant for every two Americans born each year.

However, Ramos seems to be unfamiliar with Americans’ labor-saving technology — such as robot-fruit pickers. For example, he insists that migrants are needed because Americans cannot make babies or run their own country, which he also argues is actually a country for migrants, not Americans:

The United States is a nation of immigrants, and … it’s going to need a lot more migrants to support the nation’s beleaguered economy, replace its growing population of retired workers and make up for the country’s low birthrate. Our immigration system desperately needs to be updated to face these challenges.

Ramos also seems unaware of international trade, which — if done right — allows the United States to help people in developing countries to gain wealth by selling to people in richer countries, while the people in wealthier countries — such as America — concentrate on rebuilding their middle-classes by focusing on higher-tech, higher-wage work.

The non-ideological swing-voters in the middle are increasingly opposed to Biden’s open border.
But DHS/Mayorkas will keep pushing their cheap-labor policy; So will the swing voters fight or submit?https://t.co/SgyjcZ6K2X

Ramos also appears to be unaware of life beyond Mexico and Central America — such as India and Africa — where billions of people live in poverty. He offers no reason why people from Mexico or Central America should be able to claim more of a right to take up residence in Ramos’ American zip-code than would-be migrants from Yemen, Egypt, Vietnam, or Bhutan.

Ramos is also oblivious to the damage migration has done to Central Americans countries. In reality, corrupt governments can stay in power because Biden and U.S. business groups are quietly importing the young men and women who would take to the streets in Central America to demand low-corruption democracy.

America’s exploitative policy of “extraction migration” ended in 2019 when Trump forced Mexico’s government to adopt popular low-migration changes. But Trump’s wealth-sharing policy of wage preservation and trade is now being ditched by Biden — amid cheerleading from Wall Street, Ramos, and other advocates of immigration.

This cruel and destructive policy of human extraction was sketched in an April 1 report from Guatemala in the Washington Post:

In the northwestern town of Cuilco last year, an unprecedented snowstorm wiped out acres of cornfields, devastating both the area’s labor market and its source of food in a single blow. Celso, 16, had a conversation with his father as the family of five struggled to piece together three meals a day. As the oldest son, he was seen as bearing responsibility for the family.

“We both decided that I should go to help,” he said.

Celso arrived in South Florida in January. He owed his smuggler $8,000, so he began cutting plywood at a construction site for $10.50 per hour, rather than attending high school. He’s studying English at night.

But Ramos used his op-ed to align himself the ruling elite of the country he was born in:

President Andrés Manuel López Obrador of Mexico has said that, according to his calculations, “The U.S. economy is going to need between 600,000 and 800,000 workers per year,” and that it would be good to reach an immigration agreement with the United States so that those essential people can enter the country legally instead of risking their lives trying to cross the border. He’s right.

Ramos’ push for increased migration is also an appeal to economic and political U.S. elites to override the legitimate preferences of Americans — including many of the Latino migrants.

Those elites gain from an inflow of cheap and compliant labor that suppresses the wages of political power of their fellow Americans — although the elite do compete to pay inflated real-estate prices and education costs to protect their own children far from the diversity they proudly impose on Americans.

For many years, a wide variety of pollsters have shown deep and broad American opposition to legal migration, labor migration, and the inflow of temporary contract workers into jobs sought by young U.S. graduates.

The multiracial, cross-sex, non-racist, class-based, intra-Democrat, and solidarity-themed opposition to labor migration coexists with generally favorable personal feelings toward legal immigrants and toward immigration in theory — despite the media magnification of many skewed polls and articles still pushing the 1950s corporate “Nation of Immigrants” claim.

The deep public opposition is built on the widespread recognition that migration moves money from employees to employers, from families to investors, from young to old, from children to their parents, from homebuyers to real estate investors, and from the central states to the coastal states.