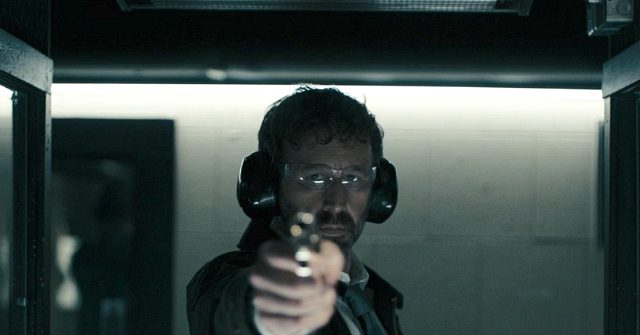 The theme of the latest episode of CBS’s rebooted Twilight Zone features an evil gun that shoots and kills people all by itself.

The much-ballyhooed CBS All-Access series dropped its May 23 episode entitled, “The Blue Scorpion.” The episode features an anthropology professor Jeff (Chris O’Dowd) learning that his father committed suicide by firearm. The professor cannot understand the man’s gruesome end because his father was a gun-hating hippie, Newsbusters wrote in its review.

Jeff ultimately comes into possession of the firearm that took his father’s life and finds it has the image of a blue scorpion engraved on the grip. At first, Jeff sets out to sell the gun but as the episode progresses, he develops an unhealthy fascination with it, even to the point of sleeping with it. The progression is depicted as if he is being dragged into the darkness and not of his own volition.

The evil gun is in control.

The formerly peace-loving professor soon discovers that his estranged wife is having an affair (with a man named Jeff) and he decides to kill his rival with his newly found firearm. But as he turns up in front of the man’s house, an intruder (also named Jeff) comes out of the blue and begins to attack the professor. It is then that the gun turns on the attacker all by itself and shoots him dead.

This frightens the professor enough that he finally decides to get rid of the evil, self-shooting gun. He throws it in a river.

But the evil gun is undaunted and washes ashore only to be found by some kids.

In a hamhanded ending, one of the kids discovers his own name written on the bullet in the magazine. Gosh… what does that mean, do you think?

If that ending wasn’t obvious enough, producer Jordon Peele does his bad impression of Rod Serling with a final bit of moralizing by essentially insisting that gun owners care about guns more than they care about people.

“Human beings have a funny way of treating things like people,” Peele piously says in his narration at the end of the episode. “But today, they’ll learn that as long as objects are valued more than lives tragedy will forever be manufactured here in the Twilight Zone.”

The moral of our story? People care more about guns than they do about human life.

Peele moralizing about the sanctity of human life comes just after he announced that he is donating the profits of his productions in Georgia to the pro-abortion movement.

Thus far, Peele’s reboot of The Twilight Zone is a pale shadow of the original. Serling’s classic series broadcast from 1958 to 1964 certainly moralized with its stories, but it generally did so in a very subtle and artful way. Whereas Peele’s updated version is more like a sledgehammer for its liberal values.