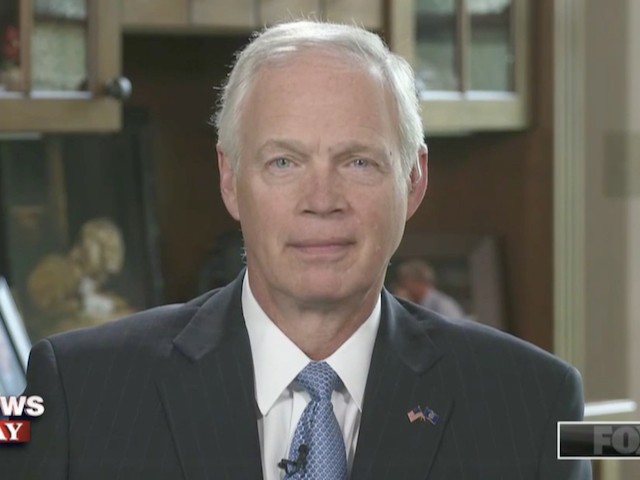 Thursday on “The Hugh Hewitt Show,” Sen. Ron Johnson (R-WI) said it is likely if President Donald Trump declared a national emergency to build a border wall it would be overturned in the courts.

JOHNSON: Well, first of all, I think the President will. He’s certainly shown himself more than capable of standing his ground whether you talk about trade or whether you’re talking about the border right now. And from my standpoint, I think one of the things Republicans ought to be looking at is just some really bare bones budgets. You know, acknowledging the fact that we are requiring people that are essential for national homeland security to work, we should pay those individuals. We should be preparing, and I’m actually working on a piece of legislation, there’s already one right now that I’m a co-sponsor of to fund the Coast Guard, but other essential personnel, we should pay those people. Hopefully, the administration will agree to do something like that. Hopefully, Mitch McConnell will bring it up on the floor of the Senate. I don’t think we should be fully opening these agencies, because Democrats simply will not negotiate in good faith if we were to do something like that. And of course, Nancy Pelosi was very clear in the White House yesterday that when President Trump said well, if we open up the government, will you work with me? You know, will I get my barrier funding? And she said no. And so again, the Democrats are being hypocritical. They’re paying lip service to border security. Barriers actually work. They absolutely do. We need them. It’s kind of a first step table stakes issue. But they’re playing politics. And I hope the President stands strong.

HEWITT: Should the President invoke a national emergency declaration even though there are good arguments on both sides whether or not that is Constitutional?

JOHNSON: Yeah, you know, I hope he doesn’t. I think that does open up a Pandora’s Box. I think we’d be far better off, again, with a very bare bones type of budget funding essential personnel, making sure those individuals get paid, funding just essential services of these agencies that are shut down right now. You know, one thing from a conservative standpoint, we could really take a look at, you know, where is the fat in some of these agencies and simply don’t fund it. And I think that would provide a fair amount of pressure on Democrats to really come to the negotiating table in good faith.

HEWITT: But the consequences are spreading. I know one person whose home purchase is screwed up, because FEMA can’t issue flood insurance, and the cost of private flood insurance is prohibitive. And so there are consequences to a government shutdown that very few people see, but a lot of people feel. I’m not sure of the politics of this, but a national emergency declaration would allow you to reopen the government and then move the conversation to the courts, although as an Article I guy, you’re not going to like the idea that Article II can act unilaterally.

JOHNSON: No, I don’t think any of us should. And let’s face it, I think we probably understand what the courts would rule in this case. I mean, they’re going to take it up to the 9th Circuit, and we know the result of that, so we still won’t get the barrier. So I want the barrier. I want a secure border. And I think the best way to do that is to acknowledge the fact, you know, the President was, came to our lunch yesterday, told everybody to hang together. You know, I’m all for doing that. I’m happy to hang with him. There will be increasing pressure, and legitimate pressure. I mean, there are some people really being harmed by this. There’s no doubt about it. So let’s address that specifically. Don’t completely reopen these agencies, but we should be ready with Plan B as Democrats, as Nancy Pelosi, Chuck Schumer continue to dig in, let’s give them basically an offer that they simply can’t refuse, but still puts an awful lot of pressure on them to negotiate in good faith and provide the barrier funding that we need.

HEWITT: But that ends up, again, leaving if not 800,000 people out of a paycheck, 400,000 people without a paycheck and the consequences of a shutdown, whereas a national emergency declaration allows you to reopen the government and moves the question of the president’s power concerning the border squarely, and Jonathan Turley has written a great piece on this in the Hill. I know you’re an Article I guy. But I’m not sure, it goes to the 9th Circuit, they’ll lose in the 9th Circuit. It would go up to the Supreme Court. Are you sure it would lose at the Supreme Court, Senator Johnson?

JOHNSON: No, I have no idea. I’m not a lawyer. But let’s face it. The administration hasn’t been doing really well in court on a lot of these issues, because we still have a lot of very liberal, progressive judges that are not going to really rule based on what the law is. It’s going to be based on their policy preference. So let’s face it. Our courts have become very politicized, and that concerns me.

HEWITT: Now, but do you believe if it got to the Supreme Court where there is a 5 member conservative majority, that he would win there on his right to protect the border via unilateral action?

JOHNSON: Well, again, I want to maintain pressure, because I actually do want to fund this wall the sooner the better. You know, Hugh, we do have a crisis. You know, it drives me crazy how Democrats are minimizing this problem. You know, in 2014, remember that enormous humanitarian crisis of unaccompanied children? Everybody recognized it. The Obama administration responded to it. The CBP was praised for treating these kids with real humanity. About 120,000 kids and family members came in, in 2014. Last year, 145,000 unaccompanied children and people in family units came into this country illegally. In the first three months of this fiscal year, 75,000 just family units have come in. so this is a growing problem, because we have a broken legal system. You know, we have the Flores reinterpretation, which is creating these incentives for people to come to this country. And once they get here, they are home free. And when I hear Democrats talk about technology on the border, I mean, that’s fine. We can track somebody, we can apprehend them. We process them. And then we disburse them, and they’re here to stay, because if we don’t detain them, it’s almost impossible to remove them. That’s the incentive that is fueling this growing crisis of unaccompanied children and families coming through our borders illegally And Hugh, there’s nothing humane about incentivizing girls to come up, a third of them, I think that’s a low estimate, get sexually assaulted. I’ve seen the pictures of a dead, desiccated animal-chewed bodies in the desert because we incentivize people to try and come to this country illegally. There’s nothing humane about that. That is the crisis.