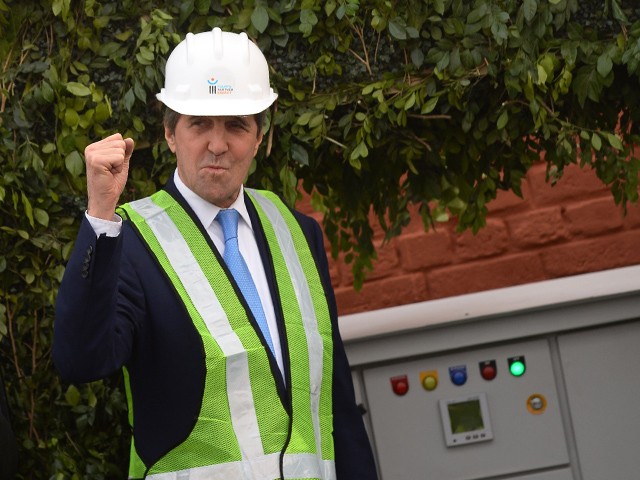 Former Secretary of State John Kerry urged the international community to combat climate change, claiming in an op-ed published Thursday that President Donald Trump’s position on the issue is “profoundly dangerous” for the planet.

“The president, he said, ‘makes decisions often without a factual basis.’ This isn’t a mere personality quirk of the leader of the free world. It is profoundly dangerous for the entire planet,” Kerry wrote in the New York Times.

Kerry argued that despite President Trump withdrawing the U.S. from the 2016 Paris Climate accord, “those of us in the fight have worked to demonstrate that the American people are still in.”

“The test is whether the nations of the world will pull out of the mutual suicide pact that we’ve all passively joined through an inadequate response to this crisis,” the former Obama official wrote.

Further, Kerry warned that the legacy of today’s leaders will be defined by their efforts to find solutions to climate change. “Future generations will measure us by whether we acted on facts, not just debated or denied them. The verdict will hang on whether we put in place policies that will drive the development and deployment of clean technologies, re-energize our economies, and tackle global climate change,” he continued. “Every day that goes by that we’re paralyzed by the Luddite in the White House is a day in the future that our grandchildren will suffer.”

In November, Kerry claimed in an interview with the Guardian “people are going to die” due to the president’s decision to pull the U.S. out of the Paris agreement. “My kids and my grandkids are going to face a difficult world because of what Donald Trump has done,” he told the British newspaper. Despite the move by President Trump to exit the deal, Kerry said he feels “better than a lot of people think” about the prospects of its success because the other 194 nations who signed the deal are still working to uphold their commitments.

Kerry’s op-ed comes as the one-time presidential candidate considers a run for the White House in 2020. “I’ve said I’m not going to eliminate, I’m not taking anything off the table,” he said during a fireside chat at Harvard’s Institute of Politics last month. “But I’m not sitting around — I haven’t been running around to the most obvious states, laying any groundwork or doing anything. Am I going to think about it? Yeah, I’m going to think about it, I’ve said that point blank.”

In September, President Trump mocked a potential White House bid by Kerry, tweeting that he would be “so lucky” if the former Obama official challenged him in 2020 “I see that John Kerry, the father of the now terminated Iran deal, is thinking of running for President,” the president wrote on Twitter. “I should only be so lucky – although the field that is currently assembling looks really good – FOR ME!”

I see that John Kerry, the father of the now terminated Iran deal, is thinking of running for President. I should only be so lucky – although the field that is currently assembling looks really good – FOR ME!