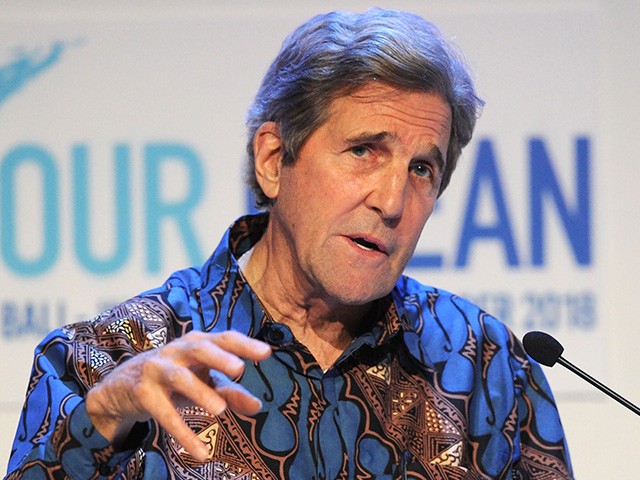 Former Secretary of State John Kerry claims “people are going to die” due to President Donald Trump’s decision to withdraw the United States from the 2016 Paris climate agreement.

While Kerry has deep regrets over President Trump exiting the climate deal, he says he feels “better than a lot of people think” about the agreement. The former secretary of state is hopeful the other 194 nations who are still signed on to the deal will work together in combating climate change.

During the interview, Kerry also criticized the Trump administration for pulling out of another agreement he helped negotiate: Joint Comprehensive Plan of Action, commonly referred to as the Iran nuclear deal. The Islamic Republic is still in talks with British, French, and Russian officials on how to salvage the agreement, Kerry told the outlet.

“I’m sorry for the world,” he said. “I’m sorry for my country, which looks ridiculous. Look, I’ve known all my life that this is a tough business, that politics is hard – that there are ups and down [sic] and if you personalize them you’re never going to survive.”

Asked whether he will run for president in 2020, Kerry, who ran unsuccessfully against then-president George W. Bush in 2004, said he is still considering a potential bid. “I haven’t ruled it out – I’m just going to think quietly about whether I think it’s… necessary. Whether I feel I can bring something to the table that’s essential, that somebody else can’t,” he said. “I’ve got to see what my friend Joe Biden does, I’ve got to see what Mike Bloomberg does.”

“There’s only so much space for genuine, capable candidates. Do I think I’m capable? Sure – I thought I was very capable and ready to be president 14 years ago, and came within one state of being it,” he added.

In a September tweet, President Trump mocked a possible run by Kerry, saying he would be “so lucky” if the failed presidential candidate would run against him in 2020. “I see that John Kerry, the father of the now terminated Iran deal, is thinking of running for President,” he tweeted. “I should only be so lucky – although the field that is currently assembling looks really good – FOR ME!”

I see that John Kerry, the father of the now terminated Iran deal, is thinking of running for President. I should only be so lucky – although the field that is currently assembling looks really good – FOR ME!