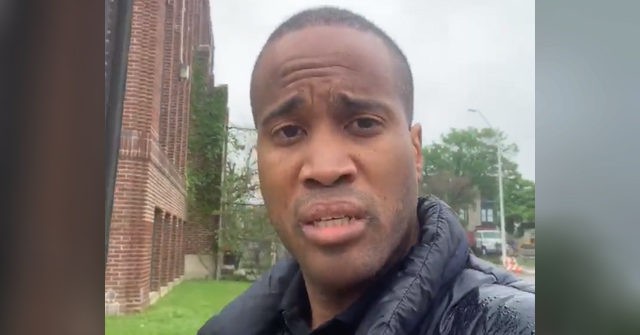 Vice President @JoeBiden ‘s latest quote is both pathetic & hurtful. Challenging millions on their blackness is condescending. The GOP was started to oppose slavery. I have the right to think and vote for myself along with all other Americans, including black Americans. pic.twitter.com/RRURX1eMbY

“Vice President Biden, with all due respect, your latest comments are both pathetic and hurtful,” he said in a video shared to social media.

“I think in a civil discourse, we can have our disagreements on politics, but you challenging me, and millions of other people out there on their blackness. Descendants of slaves, from you,” he said, pointing at the camera.

“You’re embarrassing yourself, Mr. Vice President. Should you even be running for President in a Democratic Party that says they’re for black people?” he said.

“Have you forgotten that the Republican Party was started in opposition of the Democratic Party that thought it was okay to own people?” he said.

“I am a man, Mr. Vice President,” James declared.

“Too many people have died to have the right to think and vote for myself, but I wonder if Sen. Peters agrees with you,” he said, referring to U.S. Sen. Gary Peters, James’ likely opponent.

Breitbart News sought comment from Peters’ office, and it was not immediately returned.

James said Biden should think “long and hard” about what he said.

“And also, your use of the word ‘ain’t.’ You should also make sure you carry hot sauce in your purse next time,” he ended.

That dig was in reference to a 2016 incident where Hillary Clinton told The Breakfast Club — the same program where Biden made his now-infamous statement — that she carries hot sauce in her purse, a remark widely seen as pandering to the black hosts.