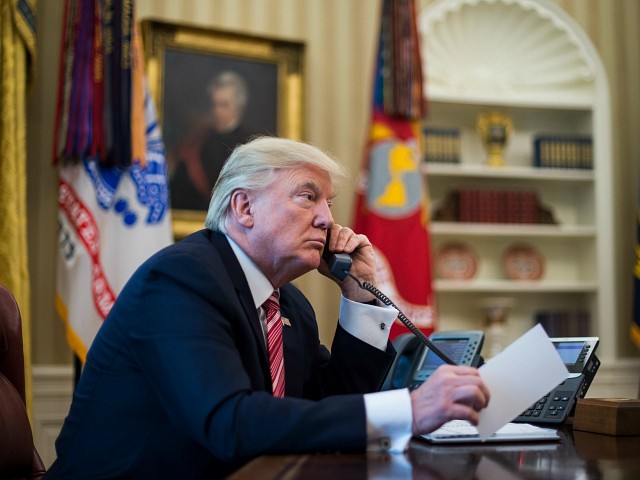 Special Counsel John Durham filed a motion in federal court in Washington, DC, on Friday alleging that Hillary Clinton’s political allies paid a contractor to spy on Donald Trump — both as a candidate, and as president — using cell phone data.

The motion was filed in the case of former Clinton Campaign lawyer Michael Sussmann, who is charged with lying to the FBI about whether he was working for the campaign when he told the FBI about a false link between Trump and Russia.

Sussmann was a partner at Perkins Coie, which often represents Democrats and which hired Fusion GPS to produce the false Russia “dossier” on then-candidate Trump, at the behest of the Clinton campaign and the Democratic National Committee.

Durham’s filing deals with a potential conflict of interest involving Sussmann’s legal representation from Latham & Watkins LLP, which also represented others in the investigation “whose interests may conflict with those of the defendant.” These, the Techno Fog blog notes, include Perkins Coie, former Perkins Coie lawyer Marc Elias, and the Hillary Clinton campaign. If they are also charged or exposed to criminal liability, the firm might face a conflict of interest among the various defendants.

The filing then reveals that Sussmann was involved in an effort to mine data from a project run by the Defense Advanced Research Projects Agency (DARPA) at a U.S. university (identified in previous reports as Georgia Tech) to spy on Trump and his associates — at Trump Tower, at Trump’s private residence, and at the Executive Office of the Presidency once Trump took office int the White House. Their goal was to dig up damaging information that could then be used to build the “Russia collusion” narrative against Trump.

As Durham notes in the filing:

4. The Indictment also alleges that, beginning in approximately July 2016, Tech Executive-1 had worked with the defendant, a U.S. investigative firm retained by Law Firm-1 on behalf of the Clinton Campaign, numerous cyber researchers, and employees at multiple Internet companies to assemble the purported data and white papers. In connection with these efforts, Tech Executive-1 exploited his access to non-public and/or proprietary Internet data. Tech Executive-1 also enlisted the assistance of researchers at a U.S.-based university who were receiving and analyzing large amounts of Internet data in connection with a pending federal government cybersecurity research contract. Tech Executive-1 tasked these researchers to mine Internet data to establish “an inference” and “narrative” tying then-candidate Trump to Russia. In doing so, Tech Executive-1 indicated that he was seeking to please certain “VIPs,” referring to individuals at Law Firm-1 and the Clinton Campaign.

5. The Government’s evidence at trial will also establish that among the Internet data Tech Executive-1 and his associates exploited was domain name system (“DNS”) Internet traffic pertaining to (i) a particular healthcare provider, (ii) Trump Tower, (iii) Donald Trump’s Central Park West apartment building, and (iv) the Executive Office of the President of the United States (“EOP”). (Tech Executive-1’s employer, Internet Company-1, had come to access and maintain dedicated servers for the EOP as part of a sensitive arrangement whereby it provided DNS resolution services to the EOP. Tech Executive-1 and his associates exploited this arrangement by mining the EOP’s DNS traffic and other data for the purpose of gathering derogatory information about Donald Trump.)

The filing further explains that claims of collusion involving were based on supposed hookups from these targeted sites with a Russian mobile phone provider, but failed to note that these connections were common in the U.S. and had begun in 2014 — i.e. during the Obama administration, long before Trump.

The revelations in Durham’s filing are already being compared to Watergate, which began when Republican operatives broke into the offices of the Democratic National Committee during the 1972 presidential campaign. In this case, however, the alleged spying was not confined to the campaign but continued after the election, once Trump was already the president.

July 2016 also marks the point at which the Obama administration launched its investigation into supposed links between Trump and Russia, after Trump joked at a press conference about Russia looking for Hillary Clinton’s missing emails.

In March 2017, after radio host Mark Levin noted evidence in the public domain that investigators had used wiretaps to eavesdrop on Trump associates, Trump claimed the government had his “wires tapped” and was attacked by the media.

Former chief investigator of the Trump-Russia probe for the House Intelligence Committee under then-Rep. Devin Nunes, R-Calif., Kash Patel, said the filing “definitively shows that the Hillary Clinton campaign directly funded and ordered its lawyers at Perkins Coie to orchestrate a criminal enterprise to fabricate a connection between President Trump and Russia.”

“Per Durham, this arrangement was put in motion in July of 2016, meaning the Hillary Clinton campaign and her lawyers masterminded the most intricate and coordinated conspiracy against Trump when he was both a candidate and later President of the United States while simultaneously perpetuating the bogus Steele Dossier hoax,” Patel told Fox News, adding that the lawyers worked to “infiltrate” Trump Tower and White House servers.

The latest pleading from Special Counsel Robert Durham provides indisputable evidence that my campaign and presidency were spied on by operatives paid by the Hillary Clinton Campaign in an effort to develop a completely fabricated connection to Russia. This is a scandal far greater in scope and magnitude than Watergate and those who were involved in and knew about this spying operation should be subject to criminal prosecution. In a stronger period of time in our country, this crime would have been punishable by death. In addition, reparations should be paid to those in our country who have been damaged by this.

Sussmann has pleaded not guilty in the case.