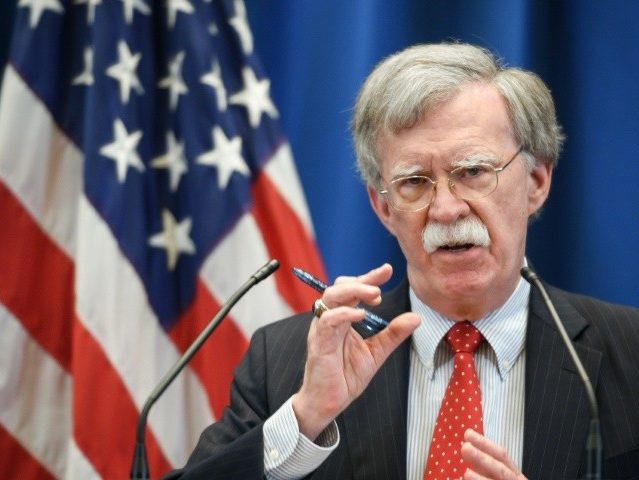 U.S. National Security Advisor John Bolton asserted on Monday that the United States does not expect to limit its presence in Syria unless Iran and its terrorist proxies fully withdraw from the country.

Speaking outside of the United Nations, where the General Assembly’s annual debate began Tuesday, Bolton asserted that the Trump administration’s policy was not “regime change,” but that the threat that Iran poses on every part of the globe that it attempts to impose is Islamist policy is a major national security concern for the United States.

Citing Secretary of State Mike Pompeo, Bolton noted that “we’ve imposed very stringent sanctions on Iran. More are coming. And what we expect from Iran is massive changes in their behavior.” Iran should not expect an end to President Donald Trump’s “maximum pressure” policy, he added.

On Syria specifically, Bolton said, “we’re not going to leave as long as Iranian troops are outside Iranian borders, and that includes Iranian proxies and militias.”

Bolton warned the Russian government, an ally of both Iran and Syrian dictator Bashar al-Assad, against supplying Assad’s forces with an S-300 missile system, which Moscow announced shortly after the Syrian regime accidentally shot down a Russian spy plane (Russia blamed the friendly fire on Israel).

“We think introducing the S-300s to the Syrian government would be a significant escalation by the Russians … and something that we hope, if these press reports are accurate, they would reconsider,” Bolton warned.

Defense News notes that Bolton’s remarks on the United States maintaining a presence in Syria sounded different from Defense Secretary Jim Mattis’s observations on the same day. Mattis insisted to reporters that the only objective the United States has in Syria is defeating the Islamic State, which the Pentagon has repeatedly said has lost over 98 percent of the territory it once controlled in Syria and Iraq.

“Right now our troops inside Syria are there for one purpose, and that’s under the U.N. authorization about defeating ISIS,” Mattis said. He nonetheless added, “everywhere you go in the Middle East where there’s instability you will find Iran.”

He added that he and Bolton were “on the same sheet of music.”

During his tenure as Secretary of State, Rex Tillerson made similar remarks to Bolton’s noting that Iran was of primary concern in the region. Iran operates in Syria through its Islamic Revolutionary Guard Corps (IRGC), its illegal terror proxies like Hezbollah, and the forced use of Afghan refugees as cannon fodder for Assad.

Bolton has repeated his warning about Iran in several major public appearances. In an interview on Fox News on Sunday, Bolton told host Maria Bartiromo that the Trump administration views Iran as a “continuing threat … not just on the nuclear side, but in aggressive, militaristic behavior in the region that puts us at risk of this kind of conflict [in Syria].”

“Our friend Israel is in danger from Iran. Our friends in the oil-producing monarchies of the Arabian Peninsula are at risk from Iran. And this — the kind of economic and political instability that Iran is causing in that region and around the world is unacceptable,” Bolton argued.

Bolton’s hard line on Iran has made him tremendously unpopular with the Islamic regime and a staple of anti-American propaganda in Iranian state media. In June, Iran’s Tasnim News Agency went so far as to call Bolton a paid ally of terrorist organizations without providing any evidence.

The United States entered the fray in Syria primarily to combat the rise of the Islamic State, originally a faction of al-Qaeda known as al-Qaeda in Iraq. It has not engaged in prolonged military action against the Assad regime, though the Trump administration did approve the destruction of Syrian government facilities believed to house chemical weapons and the Obama administration launched a failed recruitment attempt to benefit “moderate” Syrian rebels.

As Congress has not declared war on Syria, a prolonged military presence in Syria would be legal under the 2001 Authorization for Use of Military Force (AUMF) passed shortly after September 11, 2001, which allows the president “to use all necessary and appropriate force against those nations, organizations, or persons he determines planned, authorized, committed, or aided the terrorist attacks that occurred on September 11, 2001, or harbored such organizations or persons.”

The executive branch argues that, as the Islamic State was once a branch of al-Qaeda, it is covered under the AUMF. Congressmen have argued that a complete destruction of the group would necessitate a full withdrawal of U.S. troops from Syria.

Yet the Trump administration could, theoretically, argued that Iran aided the September 11 terrorist attacks and thus any action against Iranian military intervention in Syria would also fall under the AUMF. Senior Iranian state officials have admitted that Tehran chose not to stamp the passports of al-Qaeda terrorists, which would have raised alarms at U.S. customs. In May, the Southern District Court of New York ruled that Iran was “liable for the deaths of more than 1,000 people as a result of the September 11 attacks” and ordered the regime to pay $6 billion in damages to the victims of the attack.