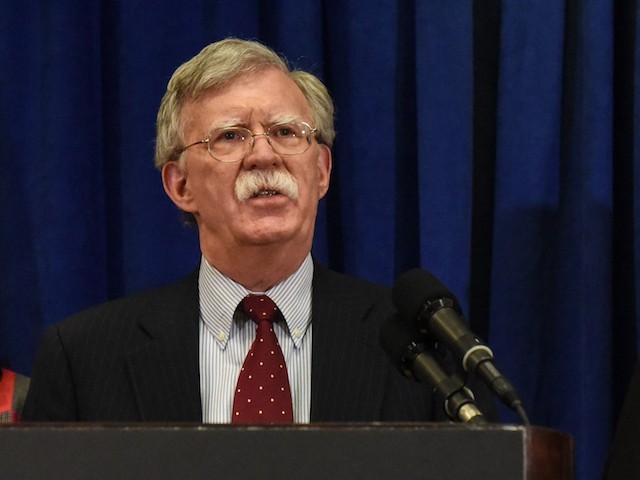 U.S. National Security Advisor John Bolton announced a new round of sanctions against Cuba, Venezuela, and Nicaragua in a speech at Miami, Florida’s Freedom Tower Thursday, declaring that the “Troika of Tyranny” would fall with support from the Trump administration.

Bolton specifically announced new sanctions on Venezuela’s oil industry and executive measures to prevent Americans from doing business with the Cuban military regime, which controls most of the Cuban economy, including its tourism sector.

“I am here to deliver a clear message from the President … to those three regimes,” Bolton said, “We will not reward torturers, murderers, and abusers.”

“This Troika of Tyranny, this triangle of terror stretching from Havana to Caracas to Managua, is the cause of immense human suffering, the impetus of enormous regional instability, and the genesis of a sordid cradle of communism in the Western Hemisphere,” he declared, calling the extreme poverty and violence against pro-democracy voices in all three countries “the true results of socialism and communism.”

Echoing President Donald Trump, Bolton asserted that the humanitarian crisis in Venezuela – currently lacking nearly all necessary medical supplies for a functional healthcare system and home to a growing hunger problem – is happening because “socialism was implemented successfully.”

“Under this administration, we will no longer appease dictators and despots near our shores in this Hemisphere. We will not reward firing squads, torturers, and murderers. We will champion the independence and liberty of our neighbors,” he continued.

Bolton went on to give the countries another nickname: “the Three Stooges of Socialism.”

“They are pathetic clowns that resemble Larry, Curly, and Moe, three absurd comedians,” he told the Miami audience to cheers.

Bolton also promised “concrete measures” against the regimes, starting with a ban on U.S. transactions with Cuban military corporations and sanctions on Venezuela’s gold industry. Bolton added the administration promised further sanctions down the line and would work to freeze access on the part of the elites of the three countries to stolen assets hidden in the United States.

Bolton also took a moment to thank conservative governments in South America for their support, applauding Colombian President Iván Duque and Brazilian President-elect Jair Bolsonaro personally as “positive signs for the future of the region.”

The administration, he promised, would fight terror “in Pittsburgh or Caracas” and, unlike President Barack Obama, “no one in this administration will take a photo in front of Che Guevara.”

“We will not glamorize Marxist guerrilla fighters,” he added, promising “no selfies” with communist oppressors.

President Trump has vocally opposed the communist regime in Cuba long before being a candidate for office. In a 1999 Miami Herald article, for example, he confessed that he had received offers to build a Trump hotel in Havana. “I had a choice to make: huge profits or human rights. For me, it was a no-brainer,” he wrote. He made reversing President Barack Obama’s appeasement policy towards the Castro regime a pillar of his 2016 campaign, earning him the first-ever presidential endorsement from the Bay of Pigs Veterans’ Association in October 2016.

In office, the president has repeatedly prioritized fighting socialism in Latin America. One of his first acts as president was to welcome Lilian Tintori, wife of Venezuelan political prisoner Leopoldo López, to the Oval Office. His National Security Strategy, published in December 2017, explicitly detailed how Venezuela and Cuba pose a threat to American national security interests.

“In Venezuela and Cuba, governments cling to anachronistic leftist authoritarian models that continue to fail their people,” the strategy read. “Competitors have found operating space in the hemisphere. China seeks to pull the region into its orbit through state-led investments and loans. Russia continues its failed politics of the Cold War by bolstering its radical Cuban allies as Cuba continues to repress its citizens.”
Trump also appeared to heighten the importance of fighting communism in the region by bringing Bolton on board as National Security Advisor. In an interview with Univisión this year, he praised Bolton for having “worked very well, is very in favor of the struggle in Cuba and Venezuela for justice.”

Years of research by security NGOs, journalists, and geopolitical experts has unveiled the deep ties between Venezuela and Cuba. Venezuela is believed to be run by an army of at least 93,000 Cuban government and military officials working in the country, according to a retired Venezuelan general who defected from the regime. Former Venezuelan political prisoners and defecting government officials have provided evidence that Cubans largely control the country’s security apparatus, including Maduro’s personal security and the most sophisticated political prisons and torture centers in the country.

“Without the direct tutelage of Raúl Castro, his military junta, the Communist Party of Cuba, the Revolutionary Armed Forces, and the entire intelligence and counterintelligence apparatus of the Castro … the government of Maduro would have succumbed already,” a 2017 report by the Foundation for Human Rights in Cuba concluded.

Venezuela and Cuba also share ties to other rogue states like Iran, jeopardizing American interests in the hemisphere. A 2014 report by the Secure Free Society revealed that Cuba and Venezuela conspired to offer legal documents – passports, visas, and permits – to mostly Shiite migrants from the Middle East believed to have ties to Hezbollah, Iran’s proxy terrorist organization. The Spanish journalist Emili J. Blasco revealed in his book Boomerang Chávez that dictator Maduro agreed to help Hezbollah in a meeting with leader Hassan Nasrallah in 2007 in Damascus, facilitated by dictator Bashar al-Assad.