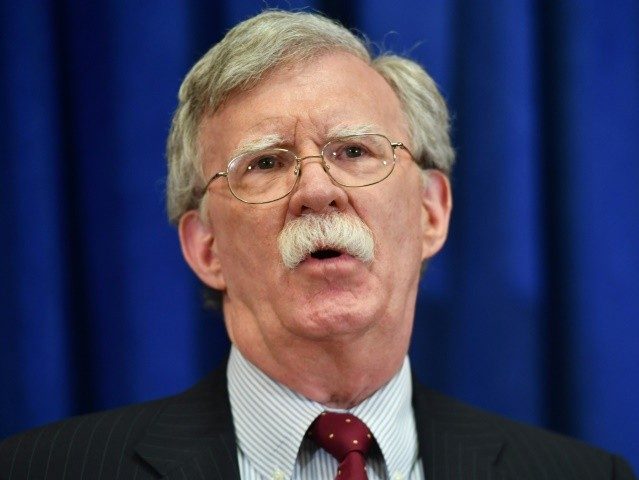 National Security Advisor John Bolton warned of China’s “very dangerous, very aggressive” moves in the South China Sea in a television interview Sunday, citing China’s colonization of the sovereign territories of other nations as high on the list of concerns President Donald Trump will bring to the United Nations this week.

The UN is holding its annual General Assembly debate starting Tuesday when Trump is scheduled to speak. At the debate, heads of state are welcome to offer remarks on whatever issues they deem important enough to bring forward to their global peers.

Bolton offered a preview of the issues on Trump’s mind ahead of this week on the Fox News Sunday Morning Futures program.

Bolton said Trump was planning a speech to the General Assembly on “American sovereignty, how that fits into America’s place in the world as a whole.”

“And we have got major issues with two of the world’s other powers, China on trade and on broader issues of geostrategic conflict, and Russia, where we’re confronting in a number of different areas,” Bolton noted, adding that China appears to be “still trying to figure out what the president’s up to” on trade.

Bolton emphasized that trade negotiations with China were a small part of the concerning behavior China has exhibited around the world.

“I think a lot of people don’t understand exactly what’s at stake here. And I think the president will address this. This is not just an economic issue. This is not just talking about tariffs and the terms of trade. This is a question of power,” Bolton said. “China—you know, they talk in the Middle East about creating facts on the ground in the Israel-Palestinian issue. China’s creating the ground in the South China Sea and putting more facts on top of it.”

“It’s very dangerous, very aggressive, something that the administration has confronted,” Bolton argued.

China claims almost the entirety of the waters of the South China Sea, including the sovereign territory of Taiwan, Brunei, Vietnam, the Philippines, and Malaysia, as well as threatening the sovereign waters of Indonesia off Natuna Island. Citing national sovereignty, China has begun constructing artificial islands on the reefs of the Spratly and Paracel islands, which the Philippines and Vietnam claim, and equipping these islands with military assets. In 2016, the United Nations Permanent Court of Arbitration ruled that China’s constructions and claims in the region were all illegal. As the UN’s court has no way of enforcing its rulings, the Communist Party of China vowed to ignore the ruling entirely and has continued to move military assets into the region.

China is now capable of controlling the South China Sea in all scenarios short of war with the United States,” the head of the United States Indo-Pacific Command, Adm. Philip S. Davidson, told Congress in May.

The United States and other allied Western nations have responded to China by holding Freedom of Navigation Operations (FONOPs) in the region – sending warships to sail through the disputed waters without stopping, asserting the international right of passage through them. China threatens those ships, ordering them to leave the area, but has not yet acted physically against them.

Most recently, the British Royal Navy sent a warship to navigate the region. The Chinese government responded with an infuriated diplomatic statement.

“The relevant behavior of the British warship violated Chinese law and relevant international law and infringed upon China’s sovereignty,” Beijing said. “China is firmly opposed to this … The Chinese side strongly urges Britain to stop this kind of provocation lest it should undermine the overall picture of bilateral ties as well as regional peace and stability.”

Last week, Chinese Ambassador to Britain Liu Xiaoming called the move a “serious infringement,” claimed that the UK’s move was “to everyone’s confusion” because the South China Sea was enjoying “peace and tranquility,” and insisted, “freedom of navigation is not a license to do whatever one wishes.”

“Such ‘freedom’ must be stopped,” Liu insisted.

This week, Australia and France announced they will join the international FONOPs against China, sailing their ships through the sea.

In addition to the South China Sea issue, Bolton also addressed the implementation of a new cybersecurity policy that expands the Pentagon’s ability to protect cyber assets from attack. “This is the first fully articulated cyber-security strategy in 15 years, as you say. And it’s long overdue. Things are moving in a very rapid pace,” Bolton said, in part because of the severity of the threat from nations like China.

Asked by Bartiromo who the “biggest bad actors are” in cyberwarfare, Bolton listed China first, along with Russia, Iran, and North Korea, all nations that cooperate geopolitically.