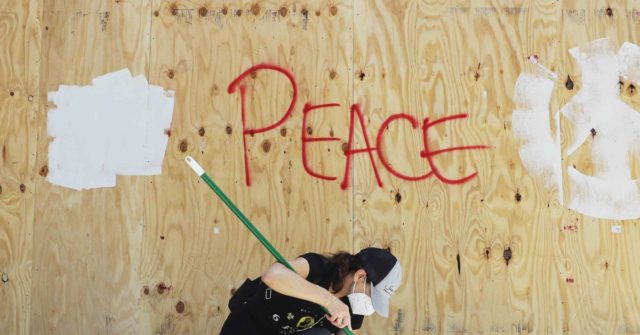 “Be a good communist and enforce the law,” said Breitbart News Senior Editor-at-large Joel B. Pollak on Tuesday morning, referring to left-wing and Democrat state and local officials’ abdication of duty to maintain law and order during recent unrest following the death of George Floyd.

Pollak joined hosts Jennifer Horn and Don Dix on Tuesday’s edition of KRLA 870 AM’s Morning Answer to discuss Democrats’ responses to ongoing protests and riots, including looting and the violence.

Communist, socialist, and assorted left-wing politicians and officials still have a duty to keep the peace, Pollak maintained.

“If you’re a communist, be a responsible communist,” Pollak remarked. “Communism is all about the state, so you would think that communists would be good at maintaining order. The fact that you’re a communist or a socialist or whatever you are, once you’re elected into office you swear an oath to defend the Constitution, your ideology is secondary to that oath.”

Pollak continued, “Right now we have people sweeping up broken glass all across Los Angeles. You have minority-owned businesses and mom-and-pop stores who have to be closed for months because of coronavirus [lockdowns]. I was out there yesterday morning in Santa Monica walking along all the debris, and I saw people of  all races, genders, backgrounds who came to help clean up.”

“The protesters — quote-unquote — put graffiti on the public library,” shared Pollak of what he witnessed in Santa Monica, CA. “That’s an attack on everybody. That’s an attack on a public state resource. So if you’re a communist, get the place in order. Enforce the law. You’re not there to make up the law as you go along.”

Pollak noted the Democrat Party’s leftward political momentum over time, yielding a presumptive presidential nominee in the form of Joe Biden who is “further left than any nominee” in American history from a major party.

This year’s presidential election features a greater political contrast between two nominees than many prior elections, assessed Pollak.

“November [is] a very stark choice between the most left-wing nominee ever brought to the polls by any party and the most conservative president since Ronald Reagan,” stated Pollak.

Pollak’s latest book, Red November: Will the Country Vote Red for Trump or Red for Socialism?, will be released on July 14.