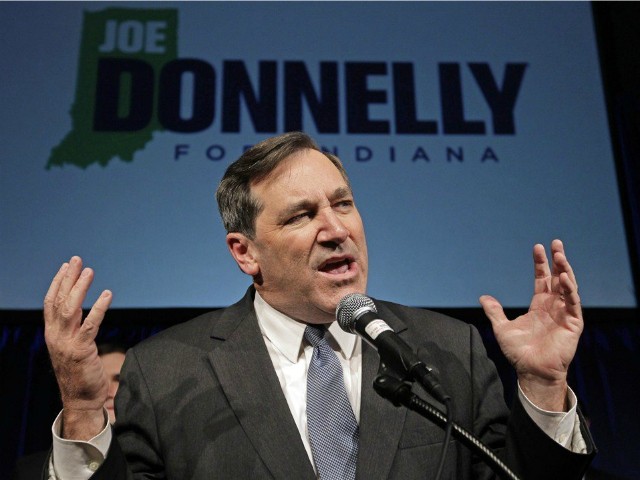 Sen. Joe Donnelly (D-IN), who faces a competitive re-election campaign, said in a statement on Friday that he will oppose Supreme Court Justice nominee Brett Kavanaugh.

Sen. Donnelly said that if Judge Kavanaugh’s nomination comes before the Senate for a vote, “I will oppose it.”

Sen. Donnelly explained that he will oppose Kavanaugh’s nomination because he believes that the FBI should investigate California psychology professor Christine Blasey Ford’s accusation that Kavanaugh allegedly attempted to sexually assault her when they were both in high school in the 1980’s.

I have deep reservations about Judge Kavanaugh’s nomination to this lifetime position and, as I stated we have been unable to get all the infomration necessary regarding this nomination, despite my best efforts. Only 113 people have ever served on the Supreme Court, and I believe that we must do our level best to protect its sanctity.

While I would gladly welcome the opportunity to work with President Trump on a new nominee for the critically important position, if Judge Kavanaugh’s nomination comes before the full Senate for a vote under these circumstances, I will oppose it.

Donnelly faces a competitive race in a state that Donald Trump won by 19 points during the 2016 presidential election.

The survey also found that 29 percent of Hoosiers said that a vote against Kavanaugh for the Supreme Court would make it less likely for them to support Donnelly in the fall midterm election, while 21 percent said they would support the Indiana Democrat and 38 percent suggested it would not make a difference.

The poll also found that 54 percent of Hoosiers approve of Trump’s job performance.

Chris Anderson, a Democratic pollster, said in September that Donnelly will have a tough time trying to get re-elected in a red-state Indiana.

“In an electorate that is likely to be nearly 90 percent white and majority female, a Democrat has almost no path to victory without at least drawing even among white women,” Anderson said.

Daron Shaw, who conducted the Fox News poll with Anderson, said, “This is a Republican state, and this seat is one of the most difficult that the Democrats are defending. Donnelly is even with suburban whites and manages to get 12 percent of Hoosiers who voted for Trump, yet he’s still down in the race right now.”