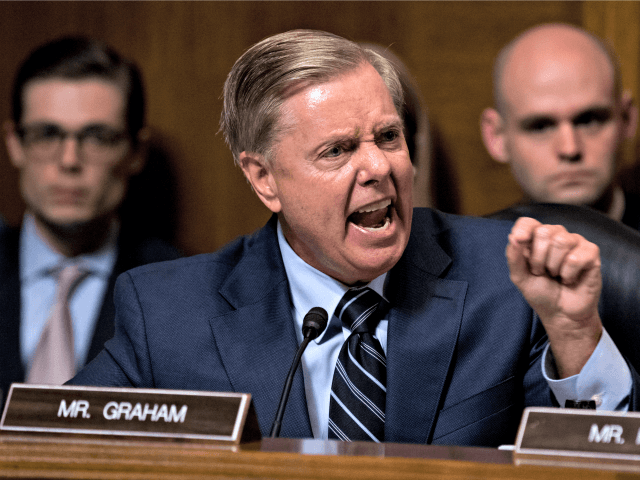 DiGenova said, “What you saw on display by the Democrats on that committee was the raw political power that they will wield against people of goodwill, and all you have to do to know that is what’s going to happen is look at what the IRS did to conservative groups under Lois Lerner and John Koskinen.”

DiGenova continued, “This is the future of our country if the Democrats get control of the House and Senate. They are vile people. There is nothing good anymore to be said about the Democratic Party. They have eschewed all integrity [and] honesty in pursuit of power. They are an ugly people, and they need to be beaten down politically and defeated.”

“I think the Democrats’ worst nightmare occurred, and that is that Christine Blasey Ford testified,” said diGenova. “It was a terrible mistake, because what you saw was a terribly troubled woman with deep emotional problems.”

“Just think about this,” began diGenova. “This is a woman in her fifties, who 35 years ago said someone attempted to sexually assault her. She then cannot tell you where it happened, when it happened, how she got there, how she left. She left her best friend there, presumably to be raped by these two mad men.”

DiGenova went on, “Her testimony was adolescent in nature. Her emotional state after 35 years was literally unbelievable. In my opinion, the best thing that happened to Judge Kavanaugh with the public disclosure of these now clearly false allegations was that people got to see her. They got to see her, and they got to see him.”

DiGenova praised Sen. Lindsey Graham’s (R-SC) criticisms of Democrats within the Senate Judiciary Committee, where he is a member.

“The top of the day was Sen. Lindsey Graham, who in my opinion, gets the profile in courage award of the decade,” remarked diGenova. “He saved a Supreme Court nomination and shamed fellow Republicans who might otherwise have been doubtful into understanding the stakes, the grown-up stakes, when you allow a bunch of Democratic thugs who betrayed their oath of office to the United States Senate, and who should all be up on ethics charges in the Senate.

DiGenova continued, “He saved the Senate. This was a great moment in American history and I am so glad that the cameras were rolling for the moment when Lindsey Graham threw off the mantle of John McCain and became his own person. That was a new Lindsey Graham yesterday. He is not the same person he was last week. I have to tell you, I am so proud of Lindsey Graham and what he did. You just cannot believe what it’s like in this town, what it was like last night. That was one of the great moments in American history, and I am so thrilled that it was on tape, and to watch the Democrats with their mouths agape, unable to respond, except for the unbelievably stupid and lame response from Dianne Feinstein, a woman who is now infamous for her duplicity and dishonesty.”

DiGenova described Ford as “deeply troubled” and an “emotional wreck.”

DiGenova said, “It is clear to me, after having been a prosecutor and a congressional counsel overseeing confirmation hearing for judges, this woman, whatever may be her state of mind, is a deeply troubled person.”

DiGenova added, “There is not a scintilla evidence of physical, intellectual, corroborative evidence to her story. In fact, it is a fantasy. It never happened. There is no evidence it ever happened. Her unconfirmed personal report given her own admission of her mental and emotional problems makes her story simply unbelievable.

DeGenova remarked on what he said was Ford’s “mental instability.”

“It was a sign of Ford’s mental instability that attorney Rachel Mitchell was able to draw out of her by developing confidence very quickly through a non-threatening dialogue,” observed diGenova.

“[Ford] actually admitted, without difficulty, that she flew all over the world, had no problem doing it, and did it for fun and for business,” added diGenova. “Mitchell was able to draw that out and establish one of the most disturbing sets of facts, was that it was a lie that she couldn’t fly to Washington. … I give A-plus to Miss Mitchell. … She drew the Democrats into a false sense of security.”

“[Kavanaugh] actually surpassed Clarence Thomas,” assessed diGenova. “I was completely taken aback by the ferocity of his defense. … It threw the Democrats for a loop. They did not know what to do.

“When all was said and done, the Democrats didn’t know what to do,” commented diGenova. “They didn’t know how to question him. The Democrats went on display with what they think is their best and it ended up being their worst face – hey, may have done more damage to their 2018 electoral prospects by that unprofessional, undignified, sleazy performance, than any group of campaign commercials ever could have done.”

DiGenova concluded, “I think Judge Kavanaugh was so good and so honest and so compelling that by the time Lindsey Graham was able to make his historic presentation to the chamber and the world, it was over. Everybody expected Kavanaugh to roll over and play dead, and he would have none of it. This was a brilliant performance by a jurist who is not known for anything other than quiet, non-tempestuous contemplation. He pulled out of the bag what I call righteous Catholic indignation. This was, in essence, a burning at the stake. What they were doing with Kavanaugh was burning him at the stake, and he would have none of it.”

“When you look at that group of people on the Democratic side, they are a despicable, unethical bunch,” opined diGenova. “I am just so pleased that these hearings turned out the way they did because America got a look at what the Democratic Party has become. These are fundamentally dishonest people [and] power-hungry.”

“The Democratic Party is no longer a party. It is a gang of thugs. … It showed how desperate and how fundamentally dishonest the Democrats are,” said diGenova.