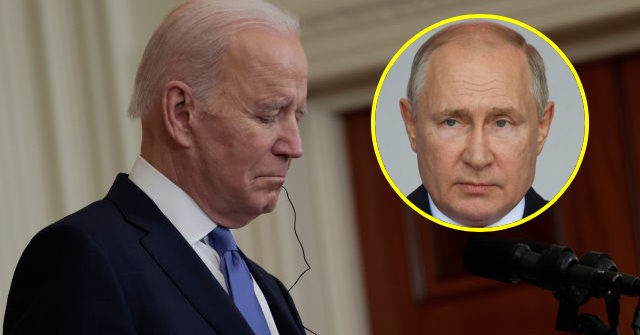 When asked by reporters if he believed Russia would go through with an invasion, Biden replied, “Yes. My sense is that it will happen within the next several days.”

The president spoke to reporters while boarding Marine One to travel to Ohio to promote his failed Build Back Better agenda.

He said Russian President Vladimir Putin was moving more troops to the borders of Ukraine, not out, as they have claimed. Biden again claimed evidence of an upcoming attack, despite sharing no new detailed intelligence to prove it.

Ukraine on Monday dismissed the Biden State Department’s withdrawal of the families of U.S. embassy staff in Kyiv as “premature.” https://t.co/6nyqLuyAi7

“We have reason to believe they are engaged in a false flag operation to have an excuse to go in,” Biden said. “Every indication we have is they’re prepared to go into Ukraine to attack Ukraine.”

The president said he wrote a letter to Putin but had not received a reply.

“They’re faxing it here — not faxing it. They’re just sending it here,” Biden replied. “I have not read it yet. I cannot comment on it.”

He told reporters he had no phone call scheduled with Putin.

Biden and his administration have been raising the alarm about Russia invading Ukraine for weeks.

“What a stupid question,” Joe Biden replied, in a comment that was picked up by audio engineers as they were ushered out of the room. https://t.co/gLrVHVWHVS

On Friday, Biden’s national security advisor Jake Sullivan insisted a Russian attack was likely to take place within days, before the end of the Olympic Games on February 20.

Ukrainian President Volodymyr Zelensky ridiculed media and American predictions of an attack on February 16, declaring a day of unity to ward off panic.

But the date came and went without Russian invading.