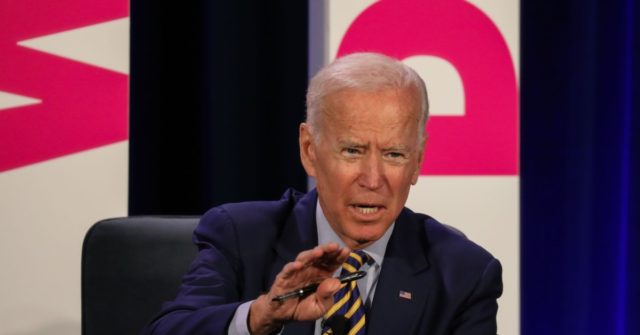 “We felt like we can’t endure another four years of Trump; we have to do everything we can to get him out of office,” Ms. McGill Johnson said.

In the ad, Mr. Biden promises to expand women’s healthcare, a Planned Parenthood euphemism for abortion.

“It’s a simple proposition, health care is a right not dependent on race, gender, income, or zip code,” Biden stats. “As president I’m going to do everything in my power to expand access to quality affordable health care for women, especially women of color.”

Mr. Biden fails to mention that currently “women of color” are already the preferred targets of Planned Parenthood’s attentions. In the United States, black babies are aborted at more than three times the rate of white babies and abortion is the number one cause of death of blacks in America.

In the ad, Biden goes on to promise to promote abortion both domestically and abroad.

“We will protect women’s constitutional right to choose, and I am proud to stand with you in this fight,” Biden said.

As Mr. Biden continues solidifying his relationship with Planned Parenthood and the abortion industry, he is simultaneously guaranteeing a pitched battle with the U.S. bishops over his abortion promotion. The Roman Catholic Church, to which Mr. Biden belongs, considers abortion to be murder and attaches its highest penalty — that of automatic excommunication — to anyone who “procures a completed abortion.”

Last fall, a Catholic priest in South Carolina denied the former vice president Holy Communion during Sunday Mass because of his staunch position in favor of abortion.

“Sadly, this past Sunday, I had to refuse Holy Communion to former Vice President Joe Biden,” said the pastor at Saint Anthony Catholic Church, Father Robert E. Morey. “Holy Communion signifies we are one with God, each other and the Church. Our actions should reflect that.”

But being denied Communion may be the least of Mr. Biden’s problems.

Among important demographic groups, Catholics make up nearly 25 percent of U.S. voters and in 2016 played a key role in sending Donald Trump to the White House, with the abortion issue looming large in many voters’ minds.

Catholics voted for Donald Trump in 2016 by a larger margin than for any other Republican candidate in the five elections of the new millennium, according to a Pew Research Center study, and some Catholic Democrats fear that the margin could be even greater in 2020.

In the lead-up to the 2016 elections, Denver Archbishop Samuel J. Aquila insisted that life issues — and especially opposition to abortion — must take absolute precedence in deciding for whom to vote.

“Catholics in good conscience cannot support candidates who will advance abortion,” he wrote in the diocesan newspaper, the Denver Catholic.

The Democrats’ platform is “aggressively pro-abortion, not only in funding matters, but in the appointment of only those judges who will support abortion,” Aquila wrote.

Other bishops singled out the Catholic former vice-presidential candidate, Tim Kaine, for special reproach because of his public support for abortion, a phenomenon likely to repeat itself this fall.

In October 2016, Archbishop Joseph Naumann of Kansas called Kaine a “cafeteria Catholic” and questioned how he could claim to be “personally pro-life” while affirming his support of Roe v. Wade and consistently voting to keep abortion-on-demand legal.

Later that same month, Bishop William Murphy of Rockville Centre on Long Island, told Catholics that support for abortion “should disqualify any and every such candidate from receiving our vote.”

“Support of abortion by a candidate for public office, some of whom are Catholics, even if they use the fallacious and deeply offensive ‘personally opposed but . . .’ line, is reason sufficient unto itself to disqualify any and every such candidate from receiving our vote,” he said in a letter that was read from the pulpit at every Sunday Mass in the diocese.

“Many issues are very important in our society today,” the bishop said. “But none of them can eclipse the centrality of human life, especially innocent human life in the womb or at the end of life.”

“Above all and over all, the number one issue more fundamental and crucial than any other is abortion – that is the direct taking of innocent life,” he stated.

Given Mr. Biden’s full-blown embrace of abortion-on-demand, many Catholic bishops will feel obliged in conscience to make similar statements as the November elections approach. At this point it seems difficult to imagine that Biden will be able to draw votes from serious Catholics, for whom the right to life is paramount.