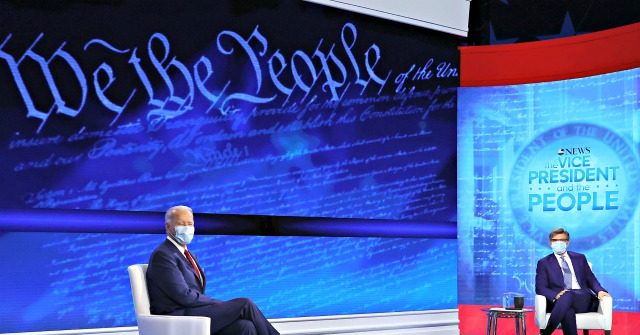 Former Vice President Joe Biden said during an ABC town hall on Thursday night that his decision on whether to pack the Supreme Court with additional justices if he became president would depend on how the confirmation of Supreme Court Justice nominee Judge Amy Coney Barrett “turns out.”

“I have not been a fan of court packing because I think it just generates what will happen for whoever wins; it just keeps moving in a way that is inconsistent with what is going to be manageable,” Biden.

“Well, I’m not a fan, it depends on how this turns out, not how he wins, but how it’s handled,” Biden said about the confirmation of Supreme Court Justice nominee Judge Amy Coney Barrett.

“So, if they vote on it before the election?” Stephanopoulos asked Biden.

“I am open to considering what happens from that point on,” Biden said.

Biden’s openness to packing the Supreme Court with additional justices marks a stark contrast from his 2005 comments, in which he described court packing as a “power grab.”

President Donald Trump released an ad this week, slamming Biden’s refusal to answer questions about his stance on court packing.

“For 150 years, the Supreme Court has had nine seats, but the radical left wants to pack the Court with liberal judges, and Joe Biden won’t tell us where he stands,” the narrator in the ad said. The video contains clips of the former vice president refusing to discuss the topic. “Biden doesn’t believe the voters deserve to know.”