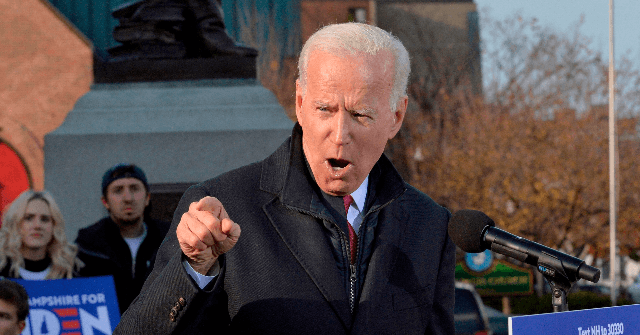 Ironically, leftists often refer to ammunition feeding devices as “clips” instead of magazines, but Biden used the word “clips” in place of bullets. He realized his mistake and corrected himself.

CSPAN published video from the campaign stop, where Biden said, “I believe in the Second Amendment, but nobody says you can have a magazine with 100 clips in it.” He quickly added, “100 bullets in it.”

HYSTERICAL! I don’t understand a word this man is saying! Psst.. Before you start talking about our 2A or ammo of any sort, at least ask someone..

This is actually a complete fail! 😂

Raise your hand if you agree 🙋‍♀️ pic.twitter.com/3Ys4DOqGSD

On October 29, Breitbart News reported Biden’s plan that AR-15 and “high capacity” magazine owners either surrender their rifles and feeding devices to law enforcement, or register them with the government.

On October 5, Breitbart News reported that Biden wants people to be able to sue firearm manufacturers for crimes committed with their products. The manufacturers of firearms that are legally made and sold are currently protected from frivolous suits via the Protection of Lawful Commerce in Arms Act (2005). Biden said, “No other outfit in history has gotten this kind of protection,” and he claimed the suits would result in “change overnight,” if he were elected president.