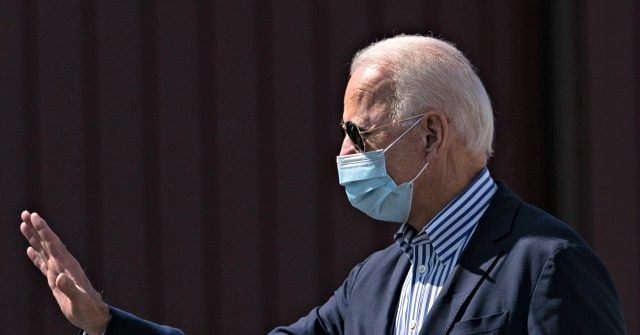 “In a 2012 report in the University of Pittsburgh’s Institute of Politics, fracking was discussed and its possible implications for the waterways from the commonwealth to the gulf,” the questioner, Michele P. Ellison, said.

Biden used the opportunity to claim that he does “not propose banning fracking.”

“Well, first of all, I make it clear I do not propose banning fracking,” he said, explaining that there need to be safeguards.

“I think you have to make sure that fracking is in fact not emitting methane or polluting the well or dealing with what can be small earthquakes in how they’re drilling,” he said, adding that it needs to be “managed very, very well.”

Biden said that the “future rests in renewable energy,” including wind and solar, which have “great, great promise.”

He said he hopes to be able to have “net zero emissions of carbon from the creation of energy, energy creation” by 2035.

Sen. Kamala Harris (D-CA) recently repeated the claim that Biden “will not end fracking” — a claim fact-checked by Breitbart News as “mostly false”:

Harris’s claim is disputed by several instances where Biden has said that fracking would cease under his administration. In the final debate of the primary, when Biden faced off against Sen. Bernie Sanders (I-VT), Biden stated: “No new fracking.”

There are numerous other instances where Biden stated fracking would be “eliminated.”

Despite her claim of Biden not wanting to end fracking, Harris has previously signaled that she wants to ban fracking.

As Breitbart News reported, the Biden-Harris energy platform would “end using hydraulic fracturing technology to harvest oil and natural gas that has allowed the U.S. to become energy independent while creating millions of American jobs.”