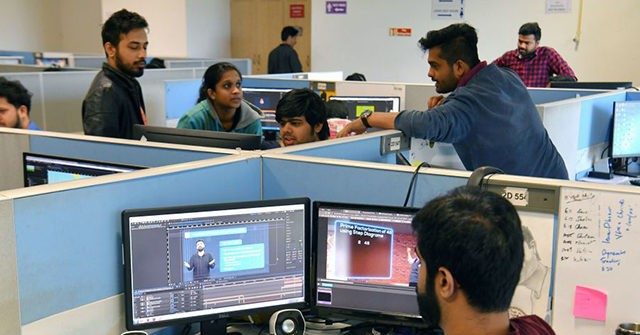 Joe Biden told NBC News that he would immediately lift President Donald Trump’s June 22 moratorium on the inflow of H-1B contract workers if he wins the 2020 election.

Trump “ended H1B visas the rest of this year,” Biden said in a June 27 town hall meeting organized by NBC News. “That will not be in my administration.”

“The people coming on these [H-1B] visas have built this country,” Biden added.

“He said the H-1Bs built this country? So the country didn’t exist before 1998? That is interesting,” responded Rosemary Jenks, policy director at NumbersUSA. If Biden is elected, she said:

I think we will see an increased number of parents realizing that their children will not do better than they did, and that is the antithesis of the American dreams. If many college graduates cannot get good jobs, well-paying jobs, they are not going to be as successful as their parents, and we will have reversed one of the foundational principles of America. – that we are a country of opportunity.

We’re already seen that the most recent high school and college grads are looking at what’s ahead of them and they are very insecure and they are very depressed. The question is how to they respond to that environment? They can take whatever job they can find, or do they rebel and go out and tear down statues?

On June 22, Trump announced H-1B reforms that will open up jobs for young U.S. graduates. He blocked the entry of new H-1B workers until January 2021, and he directed officials to complete a regulation that would allocate H-1B visas to the employers who offer the high pay. Trump adopted the reforms amid determined resistance from globalist aides because of grassroots pressure by U.S. professionals.

The H-1B program keeps roughly 600,000 foreign H-1B workers in U.S. white-collar jobs, including many who are doing on-the-job training so they can bring those jobs back to India. The H-1B and other visa workers are not immigrants but are foreigners who are allowed to take jobs in the United States, even if Americnas can do the job

Antifa’s youth are college-grad losers in a stock-market economy.
Blue-collars were slammed by mass immigration & free-trade outsourcing.
White-collars are being hit by visa-worker outsourcing to India & China.
‘Diversity’ is the estb.’s hegemony.#H1Bhttps://t.co/DLx5EAyqi4

Many of the H-1Bs work for prestigious technology companies, but many others are low-wage gig workers for foreign-owned subcontractors of Fortune 500 companies.

Many U.S. executives prefer foreign workers because they work compliantly for longer hours and lower wages in the hope of eventually getting green cards from their employers. Many of the foreign workers also pay kickbacks to the immigrant managers who are quietly allowed to hire them, Indian workers tell Breitbart News.

Executives exclude Americans from the growing ethnic labor market because they do not need green cards and so must be paid in cash from company shareholders. Americans are also excluded because they have the right to question their managers and to quit for better opportunities.

This disparity in wages, rights, and compliance ensurse that many Americans never get offered jobs that match their college training. In a February hearing, Hal Salzman, a workforce professor at Rutgers University, told a Senate committee:

Overall, our colleges and universities graduate twice the number of STEM [Science, Technology, Enginering and Mathematic] graduates as find a job each year; that is, only about half of our STEM graduates enter the STEM workforce. Of the entire workforce, only about a third of those with STEM degrees are employed in STEM jobs

The fundamental problem of U.S. and foreign [Information Technology] outsourcing firms’ hiring practices is the exclusion of U.S. workers–whether native or immigrant, citizen or permanent resident—which is made possible by specially crafted [visa worker] legislation for this purpose; it is legislation that serves as a congressionally-provided subsidy to a highly profitable industry to hire guest workers at the expense of jobs for U.S. workers.

But there is another, curiously overlooked outcome, which is the creation of workforces that are highly segregated, that have a level of exclusivity seldom seen in the U.S. in the past half-century. That is, IT workforces that are not just majority, but have levels over 70, 80, often over 90 percent from one demographic group (in the case of one large IT company, between 94 percent and 100 percent of its workforce at its various worksites are a single demographic group, and other news reports suggest this is not uncommon).

If Biden is elected, said Jenks, “he would reverse the whole thing… I have no doubt the people he would put into [the Department of Homeland Security] will be more than happy to rewrite the regulation to bring in as many foreign workers as possible.”

It is just amazing. You have 47 million Americans who have filed unemployed claims, and nobody cares that we have 600,000 H-1Bs working in this country? It is mind-boggling. We’ve got about 1.4 million Americans graduating from college this year. The job market they are going into is nonexistent, yet we have 600,000 H-1Bs working in this country, most of whom have no higher level of credential than a [U.S.] college graduate.

On day one, I’m going to send the legislation for an immigration reform bill to Congress to provide a roadmap to citizenship for 11 million undocumented immigrants who contribute so much to this country, including 1.7 million [Asian American and Pacific Island people].

Ending Trump’s cruel, inhumane policy at the border to rip children from their mothers’ arms. Take immediate action to protect [younger illegals] Dreamers — including the more than 100,000 eligible Dreamers from East and South Asia. Rescinding the un-American Muslim ban immediately …

So streaming, streamlining the naturalization process. Make it easier for qualified green card holders to move through his backlog … He ended H1B visas [for] the rest of this year. That will not be in my administration. The people coming on these visas have built this country. And so you ask the other parts of a question? I can’t remember what the other ones were. One was what I’m going to do about immigration, what was the other part? Was that it?