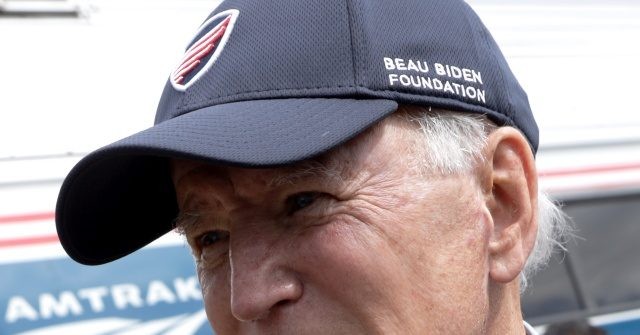 In 2009, as part of the Obama-Biden administration’s taxpayer-funded bailout of General Motors (GM), the Pension Benefit Guaranty Corporation (PBGC) terminated the pension plans of about 20,0000 non-unionized Delphi workers. In some cases, workers had their pensions gutted by 30 to 70 percent.

A federal report in 2013 detailed that the Delphi workers would likely have their pensions cut by an estimated $440 million. Meanwhile, GM topped off unionized Delphi workers’ pensions at a cost of about $1 billion.

During a campaign stop in Alliance, Ohio this week, Biden was asked by WFMJ’s Madison Tromler if he would help the Delphi workers get their pensions back.

In his answer, Biden cited the Bush Lewis Act as a potential solution, though Delphi Salaried Retirees Association’s Chair Den Black called the legislation “irrelevant” to the workers who lost their pensions.

“I support the Bush Lewis Act but it doesn’t cover the salaried employees, the non-union employees,” Biden said. “I’m going to do everything I can to figure out how they can be brought into … look, people work like hell for their pensions.”

“What I’m going to do is be working with your senator to figure out how we can in fact bring in the salaried workers who are really hurt as badly,” Biden continued. “They deserve the pension. I’m going to protect their Social Security. Trump wants to also change that.”

Bruce Gump with Delphi Salaried Retirees Association told WFMJ that Biden is “a politician” and “if he sees that there will be an advantage to him to act, then he’ll act.”

“If there’s no advantage to him, then he will either try to find an advantage or he won’t act,” Gump said.

Biden’s statements come after he claimed in 2012 that the pension-slashed Delphi workers “did fine” in the auto bailout and suggested that the Obama-Biden administration had nothing to do with the matter.

“Some of them got hurt,” Biden said in 2012. “The vast majority, because of the federal pension board they have out there to make up differences when companies go under like this, most did fine.”

“The vast majority, because of the federal pension board they have out there to make up differences when companies go under like this, most did fine.” https://t.co/EVHQ7umUVp

Last month, President Trump’s administration confirmed that they are eyeing executive action to restore the pensions of the Delphi workers. White House trade adviser Peter Navarro told local media that Biden “should have known better” than to sit by as the pensions were slashed.

Delphi, which has since split into Aptiv and Delphi Technologies, announced in 2006 that it would shutter 21 of its 29 plants in the United States — offshoring some 20,000 U.S. jobs to Mexico, China, and other foreign countries.

At the time, Delphi employed nearly 50,000 Americans who earned about $30 an hour on the assembly line. Now, workers in Mexico for the company earn about $1 an hour.