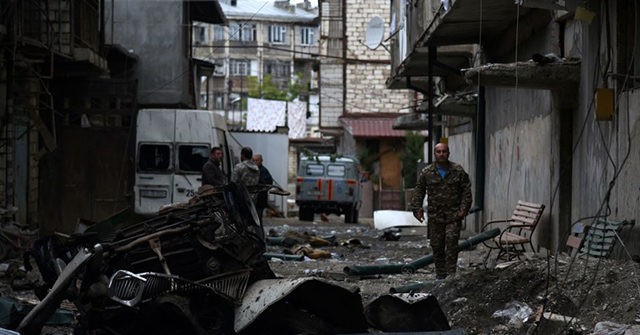 Democrat presidential candidate Joe Biden asserted in a public statement on Tuesday that President Donald Trump “must get more involved” in the ongoing military crisis between Armenia and Azerbaijan.

Azerbaijan began an assault on the separatist region of Nagorno-Karabakh — a majority-Armenian region within Azeri borders that calls itself the Republic of Artsakh — in late September, claiming that Artsakh had attacked territory actually controlled by Azerbaijan at the behest of Armenia. Both Artsakh officials and Armenian leaders claimed that the Azeris attacked first. Fighting between Azerbaijani troops and those defending Nagorno-Karabakh, which at present are not believed to be formal Armenian soldiers, has continued unabated for nearly a month. Both Armenia and Azerbaijan claim the other country has expanded the war outside Nagorno-Karabakh and into each other’s borders.

In addition to those parties, Azeri ally Turkey is reportedly flooding the region with Syrian mercenary fighters, including jihadists with experience fighting in that nation’s civil war. The governments of Armenia, France, and Russia have all accused Turkey of flying in mercenaries; Ankara denies the charges. Turkey is responsible for the 1915 genocide of nearly 2 million Armenians in the region as well as Greeks, Assyrians, and other Christians.

On the Armenian side, reports have surfaced of Yazidis, ethnic Armenians from around the world, and Greeks flying in to fight.

The United States maintains friendly relations with both countries since 1992, when the collapse of the Soviet Union created them. Washington is largely hostile to Moscow, an Armenian ally, and is treaty-bound through NATO to defend both Greece and Turkey in the event of an attack.

The Trump administration has urged a ceasefire in the region and maintained contact with diplomats representing both sides.

Biden argued that the Nagorno-Karabakh situation is of vital interest to the United States on Tuesday and condemned Trump for not doing more to condemn Azerbaijan and Turkey.

“I am deeply concerned by the collapse of the October 10 ceasefire and the resumption of fighting in and around Nagorno-Karabakh. Drones, mortars, and long-range artillery are claiming hundreds of lives on both sides of the line of contact and displacing thousands of civilians,” Biden said.

“Inexplicably, the Trump Administration has been largely passive, and disengaged, throughout this recent period of escalation,” Biden accused. “Since the outbreak of hostilities on September 27, neither President Trump nor Secretary of State [Mike] Pompeo has placed a single phone call to the leaders of Armenia and Azerbaijan, even as the region goes up in flames.”

“Rather than delegating the diplomacy to Moscow, the administration must get more involved, at the highest levels, by working with our European partners to de-escalate the fighting and return the two sides to negotiations,” Biden asserted. “The Trump Administration must tell Azerbaijan that it will not tolerate its efforts to impose a military solution to this conflict. It must make clear to Armenia that regions surrounding Nagorno-Karabakh cannot be occupied indefinitely and that credible negotiations on a lasting resolution of the conflict must commence immediately once a ceasefire is concluded.”

“Finally, it must stop coddling Ankara and tell both Turkey and Iran to stay out of this conflict,” Biden concluded.

Iran, typically an agitator in any global dispute, has actively avoided involvement in the affair, chiming in mostly to complain when Azerbaijan has accidentally bombed it. Iran shares its northern border with both countries.

While Trump has not expressed any interest in a primary role in the Nagorno-Karabakh conflict, the State Department has been opining on the affair and in contact with both sides since late September.

“The United States is alarmed by reports of large scale military action along the Line of Contact in the Nagorno-Karabakh conflict zone that has resulted in significant casualties, including civilians,” State Department spokeswoman Morgan Ortagus said on September 27. “The United States condemns in the strongest terms this escalation of violence.  Deputy Secretary Biegun called the Foreign Minister of Azerbaijan, Jeyhun Bayramov, and the Foreign Minister of Armenia, Zohrab Mnatsakanyan, to urge both sides to cease hostilities immediately, to use the existing direct communication links between them to avoid further escalation, and to avoid unhelpful rhetoric and actions that further raise tensions on the ground.”

The United States also joined France and Russia to sign a statement demanding a ceasefire a week later.

On Tuesday, Pompeo again urged the two sides to honor their recent agreement on a ceasefire in Nagorno-Karabakh.

Biden’s statement Tuesday was the first from the former vice president on the incident since hostilities began in September.

The candidate’s call for further action elicited some derision from the right. Former Director of U.S. National Intelligence Richard Grenell contended in a statement on Twitter that further involvement in the conflict would serve “ZERO U.S. national security interests” and warned of Biden, “he will take us to war.”