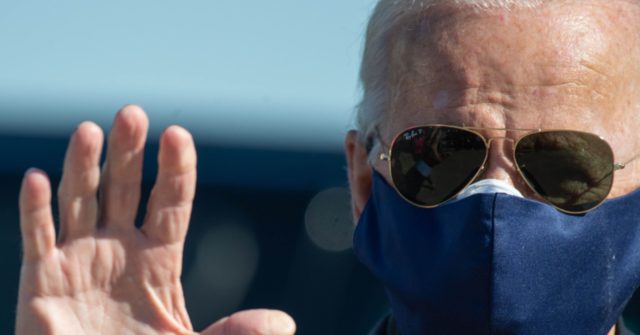 Former Vice President Joe Biden will not be campaigning for the three days leading up to the final presidential debate in Nashville, Tennessee, on Thursday evening.

The Biden campaign has called a lid until Thursday.

Biden spoke in Durham, North Carolina, on Sunday, and stopped for a milkshake before heading back to his campaign plane, avoiding most questions from reporters — including questions about his son Hunter’s emails, which suggest Biden may have participated in an effort to sell access to foreign interests.

Democrats are sticking with a “basement” strategy that has seen the 77-year-old Biden maintain a lead in most national polls. The strategy has two advantages: first, it allows Biden to model cautionary behavior toward the coronavirus pandemic; and second, it allows Biden to avoid media scrutiny.

Biden’s supporters are optimistic that he has done enough to win. They point to poll numbers, Democrat advantages in early voting turnout, and a massive lead for Biden in overall fundraising and spending.

However, Republicans also believe that Trump can still win re-election, based on advantages in new voter registration, an uptick in poll numbers key swing states, and the sheer intensity of support for the president — often at spontaneous boat parades and car rallies organized throughout the country.

The final debate will air on Oct. 22 at 9 p.m. ET from Belmont University, and will be moderated by NBC’s Kristen Welker.