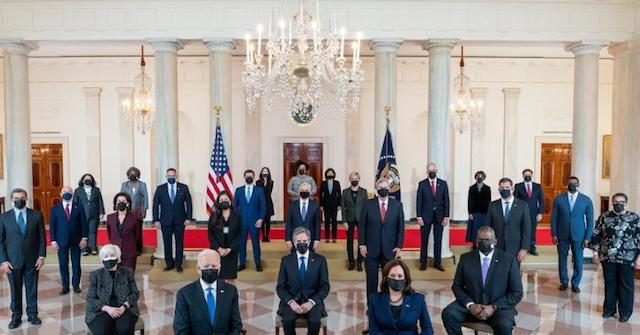 President Joe Biden boasted that his cabinet “looks like America” during his first meeting with his team on Thursday.

“This is the first in American history that the Cabinet looks like America,” Biden said as his cabinet gathered at the White House. “That’s what we promised we were going to do, and we’ve done it.”

Biden’s staff posted a picture of the cabinet gathered in one room, but remaining masked and socially distanced in order to follow federal health guidance during the coronavirus pandemic.

Health and Human Services Secretary Xavier Becerra and Homeland Security Secretary Alejandro Mayorkas are both the first Hispanic Americans to hold their positions.

Biden’s nominee to lead the Office of Management and Budget Neera Tanden would have been the first Indian-American in a cabinet position, but enough senators, including Democrat Sen. Joe Manchin, opposed her nomination which effectively killed her chances at confirmation.