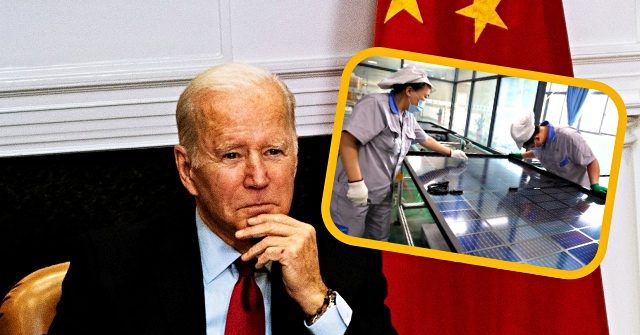 Sens. Marco Rubio (R-FL) and Rob Portman (R-OH) are blasting President Joe Biden for a move that they say will further increase the United States’ dependence on China for solar panels.

Earlier this month, Biden announced a 24-month tariff moratorium on solar panel imports from Cambodia, Thailand, Vietnam, and Malaysia. Commerce Department officials suspect that the solar panels are actually made in China or by Chinese companies but have been routed through the four southeast Asian nations to evade tariffs.

In a letter to Biden this week, Rubio and Portman said the move will make the U.S. even more dependent on China. Already, about 80 percent of solar panels installed in the U.S. are made in China or by Chinese companies.

Already the United States is over-reliant on China for solar power. Currently, 80 percent of our solar panels come from China or Chinese companies, and this reliance is not market-based. China has used a variety of anti-free market practices, such as industrial subsidies, to come to dominate the solar sector. This is why the United States imposed anti-dumping and countervailing duty (AD/CVD) orders on unfairly traded solar panel imports from China as early as 2012. It is also why the Department of Commerce is actively investigating circumvention of those AD/CVD orders by solar panel producers and exporters in Malaysia, Thailand, Cambodia, and Vietnam. The unprecedented and sweeping tariff moratorium prioritizes foreign solar panels over those made in the United States. We cannot afford to trade dependence on Russian energy for that of Chinese solar panels. It is counter to the national interest to rely on our adversaries for our energy needs. [Emphasis added]

The tariff moratorium also rewards unfair trade practices which costs U.S. jobs. Fundamentally, the ongoing anti-circumvention investigation is about upholding U.S. law. The Department of Commerce is engaged in a serious, quasi-judicial process to determine whether U.S. law has been violated. To disfigure that process as the result of outside political pressure and climate activism signals to China that our laws are malleable for the right price. The fact that it was considered necessary to preempt the results of the Commerce investigation — which may reach a preliminary determination as soon as August 30, 2022 — suggests that the facts of this investigation favor the domestic solar manufacturing industry and not the Chinese companies alleged to have circumvented U.S. law. Our duty is to workers making products in America. A giveaway like this only serves to undermine jobs here in the United States while giving a pass to those using forced Uyghur labor to make these products. [Emphasis added]

Biden’s solar panel tariff moratorium came after intense lobbying from the Solar Energy Industries Association (SEIA) which has been revealed to be representing Chinese solar companies, some of which are accused of using forced slave labor in Xinjiang.

“Once again, the Biden administration is picking China’s government-subsidized solar manufacturers that use forced labor and coal-fired power plants over U.S. solar manufacturers and American workers,” Michael Stumo with the Coalition for a Prosperous America said in a statement at the time.

“Equally concerning is the fact that the White House failed to consult a single American solar manufacturer on this disastrous decision,” Stumo said.

In addition, Biden is considering eliminating billions of dollars worth of Section 301 tariffs on China-made products. Treasury Secretary Janet Yellen and Commerce Secretary Gina Raimondo are among the top administration officials lobbying to eliminate the tariffs.