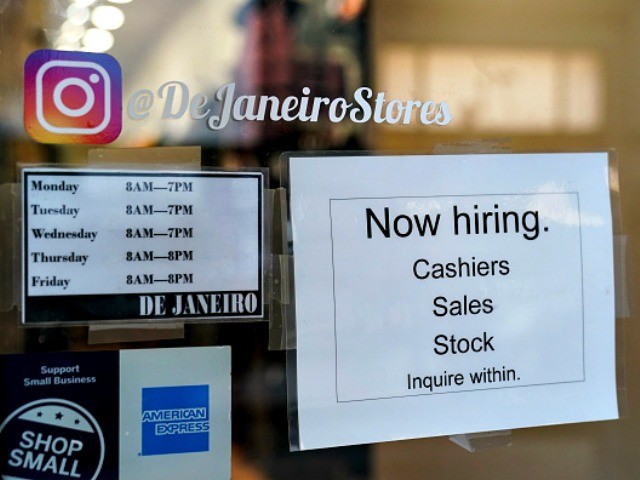 Job Creator’s Network slammed a report Monday for “contorted spin” on small business optimism, while citing nearly all CEOs of such businesses expect increased or equal revenues in 2019.

“.@Vistage #SmallBusiness survey reported in today’s @WSJ is cast with some contorted spin, so let’s dive deeper,” JCN said of the Wall Street Journal report on a Vistage Worldwide survey of 765 small firms. Firms surveyed ranged from $1-20 million in annual revenue. The survey concluded before the end of the 35-day partial government shutdown that ran from late December into January.

“#SmallBusiness CEOs are bullish on the outlook for their own business, while raising some concerns about the national economy,” the messages continued.

The WSJ report stated just 14 percent of firms surveyed expected the economy to improve in 2019, while 36 percent expected a downturn.

JCN isolated high projections for revenue and profit increases, “70% of CEOs expect increased revenues in the year ahead, and 60% expect higher profits.” In addition, “64% of #SmallBusiness CEOs report that they will hire more workers.”

“Three out of five CEO’s expect to increase their workforce during the year ahead,” JCN went on. “Given the tight labor market, small firms intend to attract employees by boosting wages (61%) & benefits (36%), while developing the skills & capabilities of their existing labor force was cited by 64%.”

“Notably, very few small firms anticipated declines in revenues (6%) or profits (9%), which is largely unchanged from the past few months,” JCN posted.

The WSJ report cited University of Michigan economist Richard Curtin, who said the country “could be” turning. While two small business executives told the Journal they were holding back on some purchases over uncertainty of the larger economy, another revealed plans to add about a dozen employees and purchase new equipment in the new year.

“Many small firms remain confident,” the WSJ article stated. “Business is rocking,” Southwest Geotechnical LLC owner Justin Stratton told the Journal. The outlet did cite a year-over-year change from January 2018 to January 2019 with 66 percent of small firms expecting revenue growth in the new year compared to 83 percent in the prior January.

More than three quarters of small businesses surveyed said the Trump administration had either helped or had no effect on their business prospects, with less than a quarter claiming it hurt, according to the report.

“#SmallBusiness state of the union = growth up, profits up, investing up, wages up and hiring up,” JCN wrote. “The economic environment for small business remains strong, demonstrating once again regulatory and #TaxReform are a winning formula for a vibrant U.S. economy.”

JCN attributed any signs of a late 2018 minor downturn to “Government #shutdown & @FederalReserve interest rate hikes. Shutdown is over and Fed is promising a more “patient” approach. Fundamentals for #SmallBusiness are strong and getting stronger.”

The overwhelming majority of Americans are far better off today than they were two years ago because of President Trump’s policies that have unshackled small business job creators. Wages are growing at their fastest pace in a decade; the unemployment rate is hovering at a half-century low; economic growth is about to come in above three percent for the first time since 2005; and entrepreneurship and investment are booming.

“More money and more opportunities for Americans are the direct result of good public policy, including tax cuts, deregulation, and increased access to capital, which President Trump has championed and delivered,” Ortiz went on. “While the State of the Union is a week delayed, President Trump’s message touting America’s economic success and the plans for even more to come is always on time.”