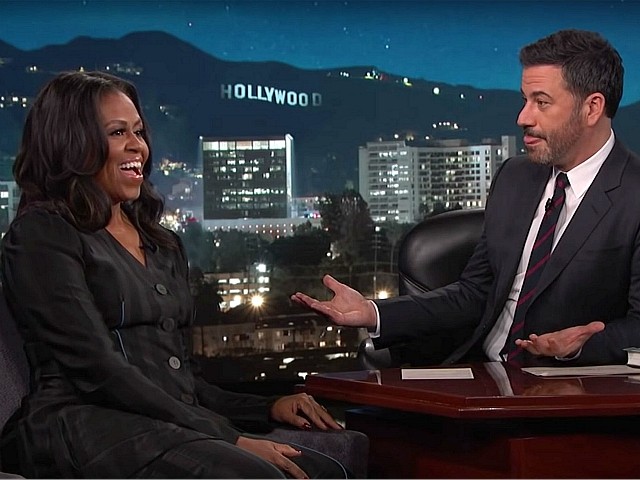 “You see how much we miss you? I mean where did you go” Kimmel said after Michelle Obama sat down to continuous applause from the audience. “We need you back in the old house.”

“You know how we feel?” Kimmel continued. “You remember the first Superman movie, Christopher Reeve. When he gave up his powers to save Lois Lane’s life and then he was powerless and then he got beat up in a diner, and he had to get his powers back to come save us from Lex Luther. That’s what we need from you and your husband!”

Obama made the appearance as part of a promotional tour for her new autobiography Becoming, where she reflects on her time in the White House as well her distress at Donald Trump’s victory over Hillary Clinton.

“You remember Mrs. Obama? From when we had a United States?” Kimmel quipped. “Our former First Lady is here to share stories from her new autobiography, Becoming. As in, ‘What the hell is this country Becoming?’”

After plugging her book, Obama joined in a comedic routine where she read aloud things she was supposedly not allowed to say while in the White House, which include admitting to using Laura Bush’s Netflix password and confessing to never eating a vegetable.

In the book, Obama reveals how she tried to “block it all out” after it emerged that Trump had won the election, and gave up pretending to smile at his inauguration. In an interview with Oprah Winfrey this week, she also admitted to crying after inauguration ceremony, but claimed it had nothing to do with Trump’s victory.