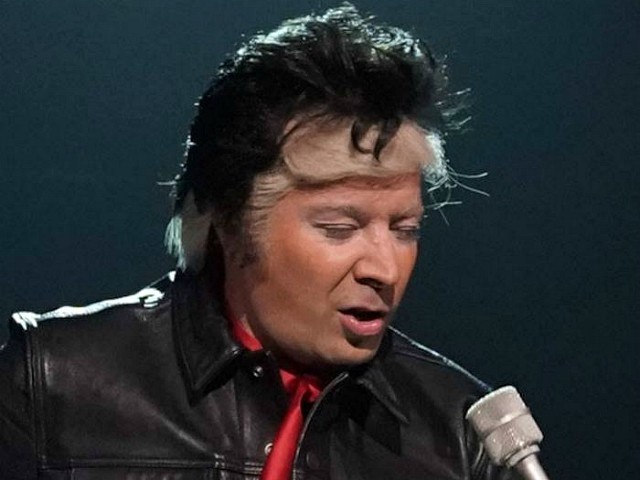 Jimmy Fallon provided an alternate rendition of the song, with lyrics about the Mueller investigation and Trump’s alleged relationship with the Russian government, as well as the various indictments against high-profile members of his administration.

“It’s great being here in Memphis. A lot of people have been saying I look like Elvis. It’s true, they say I look like Elvis so I’d like to do a tribute to the great man himself, the King,” Fallon said in his introduction to the song.

The lyrics went as follows:

Chorus
Manafort spoke to Julian Assange
Elvis’ hair is black and mine’s orange
I’m all shook up, the walls are closing in
I’m a hunk of burning love for Vladdy Putin

The performance was a mockery of Trump’s claim earlier this week that people told him he resembled Elvis when he was younger.

“Other than the blonde hair, when I was growing up they said I looked like Elvis,” Trump said during a rally near Elvis’s birthplace in Tupelo, Mississippi. “I always considered that a great compliment. We love Elvis.”

Pres. Trump, in Tupelo, MS, the birthplace of Elvis Presley: “Other than the blonde hair, when I was growing up they said I looked like Elvis…I always considered that a great compliment.” https://t.co/NkJuIoh4fP pic.twitter.com/uBAzhWwA9G

Last week, Trump also awarded a posthumous Presidential Medal of Freedom to the late “King of Rock and Roll,” the highest honor a sitting president can bestow on a civilian, describing him as an “enduring American icon.”

“Elvis Presley defined American culture to billions of adoring fans around the world,” the White House said in a statement. “Elvis fused gospel, country, and rhythm and blues to create a sound all his own, selling more than a billion records.”

“America is blessed to have the most skill, passion, and talent anywhere on Earth,” Trump said during the ceremony. “We are truly a great nation and we are a nation that is doing really, really well right now.”