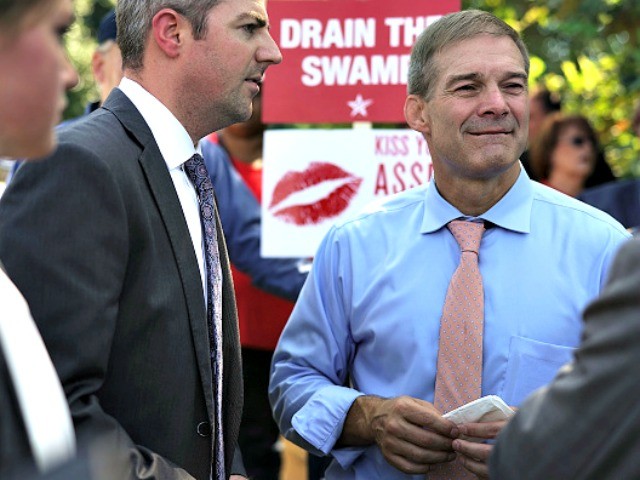 House Freedom Caucus co-founder Rep. Jim Jordan (R-OH) told fellow Republican lawmakers that he will combat GOP “business as usual” should they elect him to become the House Minority Leader next week.

Rep. Steve Scalise (R-LA) announced that he plans to run for House Minority Whip, ending months of speculation over if he too will challenge McCarthy and split the vote in favor of Jordan.

In a letter to Republican colleagues, McCarthy said that he has built a Republican majority in the past and he can do it again in 2020.

“I helped build a majority from a deeper hole than this and I have what it takes to do it again,” the California Republican said. “That is why I have decided to run for Republican Leader and humbly ask for your support.”

McCarthy added, “We have seen where Democrats want to take our country — Jim Jordan Promises to Combat Republican ‘Business as Usual’ as House Minority Leader and crushing debt for our kids and grandkids. We simply cannot let that happen.”

“We have been largely conducting “business as usual” for the past two years, and we just paid the price,” Jordan told his GOP colleagues.

Jordan asked rhetorically, “Moving forward, the American people (who share our conservative policy goals) still want us to be agents of change. Will we listen?”

The House Freedom Caucus co-founder said that, even in the minority, they must make principled stands for conservative goals such as:

Under Republican leadership, government spending legislation skyrocketed, most prominently thanks to the $1.3 trillion omnibus spending bill that did not fund President Trump’s promised border wall.

Further, House Speaker Paul Ryan pushed his own amnesty bill instead of the Trump-endorsed Goodlatte immigration bill in June. Immigration experts noted that the Ryan bill could grant amnesty to nearly 3.5 million Deferred Action for Childhood Arrivals (DACA) illegal aliens and would also grant amnesty to illegal immigrants first and then eventually build a wall on the southern border.

In a June interview with Breitbart News, Jordan said the Ryan bill was inconsistent with the 2016 Trump election mandate to secure the border and combat illegal immigration.

Despite Republican leadership ignoring the Goodlatte bill backed by Jordan and the House Freedom Caucus, it received more votes than the Ryan amnesty bill.

Jordan said that the best way for House Republicans to carry out the president’s goals should be led by the concept of “doing what you said you would do” (DWYSYWD), which Jordan has become famous for saying over his several terms in Congress.

The Ohio conservative said that the American people “are hungry for us to carry their agenda forward” and that carrying out DWYSYWD will “be a great first step in earning back the trust of the American voter.

Jordan concluded, “The next two years of Congres and the presidential election of 2020 will define the future of our country. If we are to regain the majority, we cannot continue on the same path.”