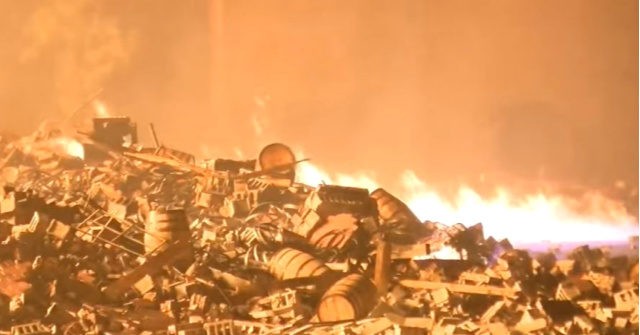 At least 45,000 barrels of Jim Beam bourbon were destroyed in a massive warehouse fire in Kentucky on Tuesday night.

Wow. These images from the fire at the Jim Beam aging facility are unbelievable. Emergency management officials estimate 45,000 barrels of bourbon were in the rickhouse. Read more here from @WKYT: https://t.co/jYq66lZxjK pic.twitter.com/JQ9hTewYcj

That second warehouse proved easier to quench than the first, which was still burning unabated five hours later. Chandler predicted that firefighters would still be on the scene late Wednesday night. Dan Cohen, spokesman for Jim Beam parent company, Beam Suntory, confirmed that no one was injured in the blaze, while thanking first responders for their efforts.

But if you are still worried about acquiring a bottle of your favorite spirit, Cohen said that you need not worry:

We have a comprehensive warehouse safety program that includes regular inspections and rigorous protocols to promote safety and the security of our aging inventory. We operate 126 barrel warehouses in Kentucky that hold approximately 3.3 million barrels for our brands, and the warehouse that was destroyed contained 45,000 barrels of relatively young whiskey from the Jim Beam mash bill. Given the age of the lost whiskey, this fire will not impact the availability of Jim Beam for consumers.

While the Kentucky Energy and Environment Cabinet does not believe the water used to extinguish the fire will cause dangerous runoff for drinking water, it anticipates a “serious impact” on local flora and fauna. It has advised firefighters to allow the remaining fire to burn itself out to prevent further ecological damage to the nearby Kentucky River.