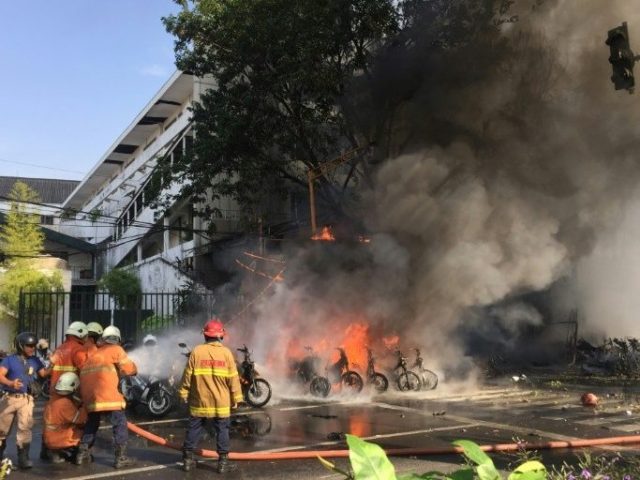 Sofyan said that jihadis were already preparing to launch a terror attack in Indonesia, implying that it was a question of when, not if, they strike.

“[An attack] has to be anticipated and not be dismissed. There needs to be caution,” Sofyan warned, adding that regions of Indonesia where jihadis have been known to operate – such as the islands of “Sulawesi, Sumatra, and West Java”– should exercise vigilance.

He explained that the ongoing Chinese coronavirus pandemic has caused serious vulnerabilities to crop up within Indonesia’s government and society, creating optimal conditions for the terrorists to strike. As examples, Sofyan cited the general distraction of the national government in dealing with the public health crisis and the swelling of anti-Chinese sentiment among Indonesians, itself a result of the pandemic-induced economic recession.

According to the SCMP, in April, Indonesia’s Manpower and Transmigration Ministry said that 2.8 million people had lost their jobs as a direct result of the economic recession caused by the coronavirus pandemic, adding that an additional 70 million “informal workers” were “at risk” of unemployment.

As of May, a total of 98,900 foreign workers were active in Indonesia’s workforce, less than 0.1 percent of Indonesia’s total workforce of 124 million, the SCMP reported. Of foreign workers, the Chinese accounted for the largest group – 35,781 workers– followed by the Japanese at 12,823, and South Koreans at 9,097. China invests heavily in Indonesia and is the nation’s second-largest foreign direct investor. In 2019, Chinese companies invested $4.7 billion in Indonesia.

Though long-standing, Indonesian resentment toward Chinese foreign workers has increased significantly during the current recession. According to the report, many Indonesians have recently criticized the government for allegedly favoring Chinese workers over locals in allotting work contracts, prompting the government to respond.

In early May, lawmakers in southwestern Indonesia’s Sulawesi province denied the planned arrival of 500 Chinese foreign workers contracted by Chinese metalworking companies in Indonesia hoping to employ them instead of locals. Although the Chinese companies had already managed to secure work permits for the group from Jakarta’s central government, the act was overridden by Indonesia’s Ministry of Manpower, which postponed the workers’ arrival, citing concerns that it would spread coronavirus.

Mohd Adhe Bhakti, the executive director of Indonesia’s Center for Radicalism and Deradicalization Studies, warned that if the Indonesian government fails to stand firm in denying the entry of foreign workers, especially the Chinese, to the country, terrorist attacks in the near future are “highly possible.” Speaking to the SCMP, Bhakti pointed to an attack on Monday of a police station in South Kalimantan, in which a police officer was killed with a sword by a group of suspected pro-Islamic State terrorists. The incident occurred on Pancasila Day, a public holiday celebrating the birth of Indonesia’s secular, national ideology. Bhakti says that the attack’s occurrence on a national holiday was no coincidence, as terrorists prefer to stage attacks on dates of symbolic significance. He advised Indonesians to remain alert to future terror attacks on major holidays.

In the past, jihadis have planned or carried out terror attacks during the Christmas holiday and on New Year’s Eve. Last Christmas, the Indonesian government deployed 200,000 police officers to guard against threats of violent attacks from jihadis during the Christian holiday.