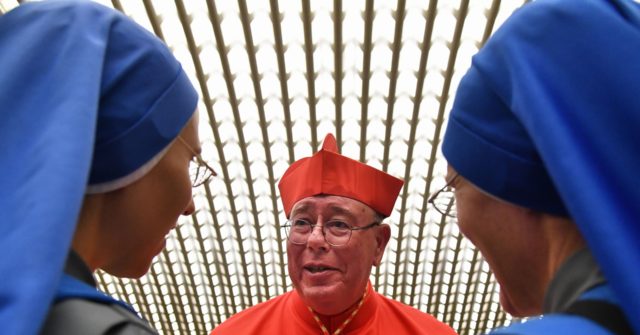 Cardinal Hollerich, the archbishop of Luxembourg and president of the EU Bishops’ Commission (COMECE), said that Catholic teaching on the sinfulness of homosexual relations is mistaken and needs to be updated.

“I believe that the sociological-scientific foundation of this teaching is no longer correct,” Hollerich said, while calling for a fundamental revision of the teaching.

The Catholic Church teaches that same-sex attraction is “is objectively disordered.”

“Basing itself on Sacred Scripture, which presents homosexual acts as acts of grave depravity, tradition has always declared that ‘homosexual acts are intrinsically disordered,’” states the Catholic Catechism, adding that under no circumstances “can they be approved.”

The cardinal also said that the way Pope Francis has dealt with the issue of homosexuality could lead to a change in official Church teaching.

The decision by Pope Francis to offer his tentative support for civil union laws for same-sex couples was praised Thursday by U.N. chief Antonio Guterres. https://t.co/3d7n6WctCL

In 2018, Pope Francis said it is a mistake to downplay the seriousness of homosexuality, insisting that homosexuals have no place in the priesthood.

Asked whether homosexuality was a problem for priests or “just an expression of an affection,” the pope said it is “a mistake” to treat it as something unimportant.

“It’s not just an expression of an affection. In consecrated and priestly life, there’s no room for that kind of affection,” he said.

In 2021, the Vatican’s doctrinal office, in a text personally approved by Pope Francis, declared that the Church has no power to bless homosexual unions, since God Himself “does not and cannot bless sin.”

Blessings require “that what is blessed be objectively and positively ordered to receive and express grace” and therefore, “only those realities which are in themselves ordered to serve those ends are congruent with the essence of the blessing imparted by the Church,” it declared.

For this reason, it is not licit to impart a blessing on relationships that involve sexual activity outside of marriage (the indissoluble union of a man and a woman), “as is the case of the unions between persons of the same sex,” it stated, because the union itself is “not ordered to the Creator’s plan.”

Blessing an illicit sexual union would be “to approve and encourage a choice and a way of life that cannot be recognized as objectively ordered to the revealed plans of God,” it noted.