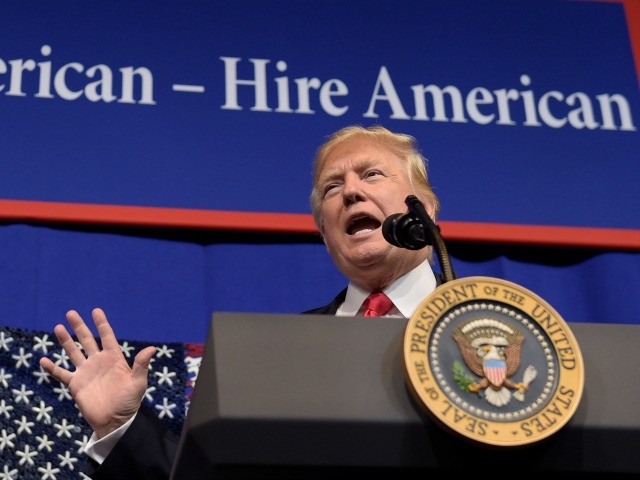 Business-first Republican advocates want the president to trade away his “Hire American” policy to get border wall funding, while pro-American advocates say he can win by trading concessions in healthcare, trade, and infrastructure.

President Donald Trump “needs a strategy … and the strategy has to be to trade something that is not immigration,” said Jessica Vaughan, policy director at the Center for Immigration Studies.

The chances of a broader swap were raised on January 3 when White House officials recommended a Presidential veto of Pelosi’s first budget proposal.

Democrats are blocking wall spending, but they have other policy goals in trade, infrastructure, healthcare, and the environment, Vaughan said. For example, Democrats want to add more worker protection to the NAFTA 2 treaty, and they want more construction projects in big cities, she said. Trump should offer concessions in those areas, and so force Democrats to deal or reveal the political cost of their obstructionism, she said.

If House Majority Leader Nancy Pelosi rejects those concessions, she and other Democrats will quickly see how she is martyring her political agenda by opposing a few billion dollars worth of fencing in 2019, Vaughan said.

If the wall talks are expanded, Pelosi will be under pressure to accept a compromise, Vaughan said, because “she has to show she can govern.” Moreover, Pelosi’s majority is made possible by semi-centrist Democrats who ran to her right in the November elections. They need compromises to keep their seats in 2020, she said.

Also, outside the Beltway, voters know Trump was elected to build the wall. “I think people’s perception is that the Democrats are really the problems here and that [perception problem] is going to get worse,” Vaughan said.

But the GOP’s business-first wing instead wants Trump to trade away his lower immigration, higher wages policy to get a few billion dollars for the wall, she said.

That wage-boosting “Hire American” policy is now raising wages for GOP voters before the 2020 elections — but it is also crimping the profits and stock values demanded by the GOP’s donors and business-first legislators.

For example, GOP Sen. Lamar Alexander, who voted for the Gang of Eight Amnesty in 2013, used a January 3 article in the Washington Post to urge Trump to endorse a huge amnesty that would drive down wages before the election:

Go bigger: Pass the bill that 54 senators voted for last February, which combined a solution for children brought to the United States illegally (Deferred Action for Childhood Arrivals, or DACA) and $25 billion in appropriated funding for border security over 10 years. The bill failed only because of last-minute White House opposition.

Go really big: Begin the new Congress by creating a legal immigration system that secures our borders and defines legal status for those already here. In 2013, 68 senators — including all 54 Democrats — voted for such a bill, but the House refused to take it up. That bill included more than $40 billion and many other provisions to secure our borders.

In 2013, Alexander voted for the 2013 “Gang of Eight” amnesty bill, which would have amnestied an unknown number of migrants, and also allowed prestige companies to import a limitless number of cheap foreign college graduates for middle-class jobs sought by the American graduates.

“We need to make it easier in some respects for people to come here legally and work temporarily and then go home, particularly in the agriculture industry,” Romney told CNN’s Jake Tapper on January 2. “In Utah, we rely on a lot of people coming in to harvest crops and so forth,” he said, adding, “We ought to be guided by what the states need, as opposed to what the federal government imposes on them.”

Other legislators are pushing for an amnesty of at least one million younger ‘DACA’ illegals. Breitbart News reported January 3:

A handful of Republican and Democrat lawmakers are continuing to tout a plan that gives amnesty to nearly a million illegal aliens in exchange for some amount of funding for President Trump’s proposed border wall along the U.S.-Mexico border.

Rep. Mark Meadows (R-NC), as well as Sen. Lindsey Graham (R-SC), and Democrats such as Rep. Jackie Speier (D-CA) and Debbie Dingell (D-MI) have signaled that they are at least open to granting amnesty to at least 800,000 illegal aliens who are enrolled in the Deferred Action for Childhood Arrivals (DACA) program if it meant receiving a fifth of wall funding.

Vaughan’s proposal may never make it onto Trump’s desk because Trump’s advisers include many deputies and aides who are part of the GOP’s business-first wing.

For example, interim chief of staff Mick Mulvaney told Fox News on December 28 that “legal immigration is so important and wonderful for this country.”

Nationwide, the U.S. establishment’s economic policy of using legal migration to boost economic growth shifts wealth from young people towards older people by flooding the market with cheap white-collar and blue-collar foreign labor. That flood of outside labor spikes profits and Wall Street values by cutting salaries for manual and skilled labor of blue-collar and white-collar employees.

Immigration also steers investment and wealth away from towns in Heartland states because coastal investors can more easily hire and supervise the large immigrant populations who prefer to live in coastal cities. In turn, that investment flow drives up coastal real estate prices, pricing poor U.S. Latinos and blacks out of prosperous cities, such as Berkeley and Oakland.