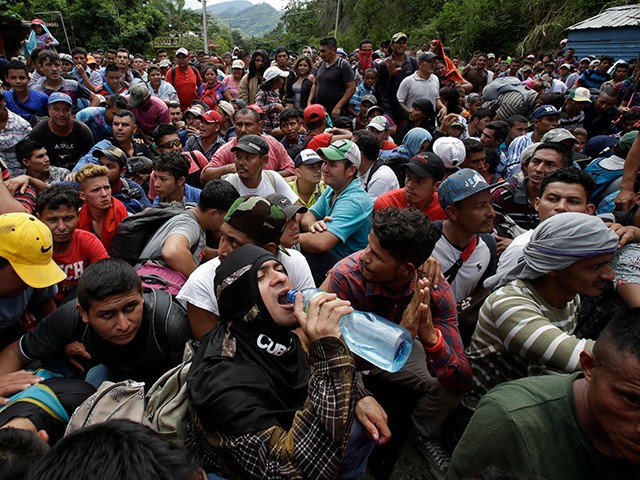 Jessica Vaughan, director of policy studies at the Center for Immigration Studies, advised the Trump administration to pressure Mexico against allowing entry to caravans of migrants seeking passage to the U.S.

“It’s really our policy that is enticing them to come, and I am surprised it took this long,” said Vaughan. “This is not the choice of the Trump administration. It certainly does not want to entice people to take this dangerous journey, and when you look the pictures, it is a lot of young men, but it’s also some kids coming, too. It’s dangerous for them, but it now has this aura of an adventure that people are taking, like the gold rush or something.”

Vaughan said aspiring migrants are advised to travel to America by both smugglers and ostensibly humanitarian groups based in the U.S.

“[Migrants] are being told by the smugglers — who I’m sure are among them, or the organizers, I mean they’re really almost the same thing — to [travel to the U.S.]. Certainly they’re being egged on by the humanitarian groups and even by groups within the United States.”

In April, Left-wing American lawyers offered migrant caravan travelers “legal training sessions,” advising migrant what to say to improve their likelihood of obtaining entry to the U.S. in their dealing with immigration judges and asylum officers.

Mansour asked, “What is the incentive for people not to come?”

“There is no incentive [for them not to come],” replied Vaughan. “This could be a much larger group by the time it gets to our border. It started out as I think 160 men, then word got around. It was like the Pied Piper, they started joining, and next thing you know, it’s at least 1,600 people [with] some accounts placing it closer to 2,000. We’ll see what happens.”

Vaughan added, “Why wouldn’t it grow? They are realistically optimistic that they will be let into the United States. At some point, the Trump administration, the best possible solution is for them to say, ‘No.’ Or put pressure on Mexico to not issue them transit visas. They have no basis to enter Mexico unless Mexico is going to give them asylum.”

“Claiming to have witnessed violence or to have come from a violent place is not good enough to get you into the country to make an asylum claim, to pass your ‘credible fear’ test,” stated Vaughan. “They’re expected now to show that the persecution that they claim was carried out by the government, or with the government’s blessing. General violence is not going to cut it.”

Vaughan added, “If they make it all the way to California, they’re going to be flown back to Central America, and it’s a big deal to try to come back after that happens. I think that would be pretty discouraging to anyone.”

“The problem is they have to get asylum officers and judges to actually do that, to follow that guidance. And they’re getting some resistance from within the ranks, the judges themselves and some of the career core at USCIS. There will be some lawsuits.”

Vaughan said, “The best possible solution is to not let [caravan migrants] enter,” adding that “it is obvious to everyone” that the caravan migrants’ motivations are “economically based.”

Vaughan explain, “The goal should be to have people not get across, at all, because then it’s a whole different story once they set foot in the United States, whether they’ve been admitted or paroled or whatever. As soon as we let them across, that’s when it becomes extremely difficult to remove them and return them to their home countries.”

Vaughan said, “The Trump administration also implemented a pilot program at San Ysidro which is the busiest crossing point near San Diego, which is far from where a lot of these migrants have been coming, but it one place that has seen a lot of them. They set up a pilot program there that if even a family showed up and asked for asylum, they’ve kept them in custody at the border holding facility and adjudicated their claims immediately, and the asylum officer was right there and the judge is supposed to be right there, too.”

Vaughan continued, “We haven’t seen any result as to how that’s working, and that way they could be removed very quickly if their case is adjudicated; in other words, they don’t even need to transferred to ICE custody, that CBP and USCIS together can deal with them. … The important thing is that they would be dealt with very quickly at the border itself and never really allowed to be admitted [or] enter the country.”

Mansour asked if the aforementioned migrants can legally appeal denials of their asylum requests.

“Not after the immigration judge issues a final order of removal,” replied Vaughan. “If you have judges who are inclined to follow the guidance of the attorney general and do their job the right way, then it should work, but if you get judges that are part of the resistance then it’s not going to work. This is happening all over the border. … They’re dropping them off, every day, dozens of them at the bus center, because they have nowhere to put them.”