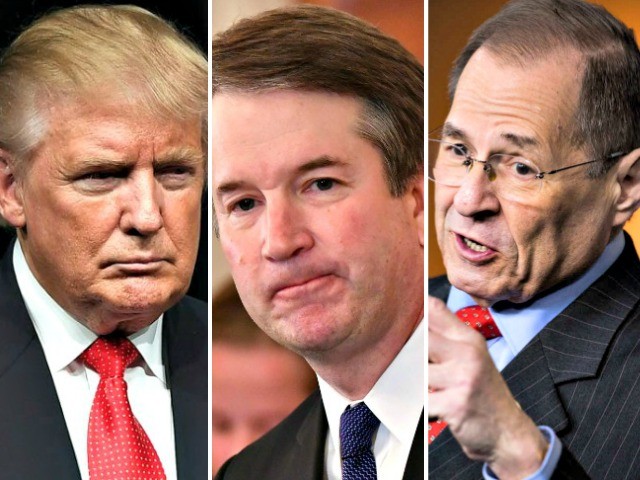 The Federalist reported that Nadler was riding an Amtrak Acela train to Washington, DC, Wednesday to meet with his congressional staff and House Judiciary Committee staff when he revealed in a phone call with a friend the details of House Democrats’ plans for the next two years.

“We’ve got to figure out what we’re doing,” he explained on the call before he began discussing House Democrats’ plans to investigate and later impeach Supreme Court Justice Brett Kavanaugh for alleged perjury.

The first option, he explained, was to investigate the FBI for how they handled the uncorroborated claims from several women claiming Kavanaugh sexually assaulted them.

“They didn’t even do a half-ass job,” he said. “They didn’t interview 30 witnesses who said ‘Interview me! I’ve got a lot to say!’”

He then brought up Democrats’ Plan B, which was to go after Kavanaugh himself, because “there’s a real indication that Kavanaugh committed perjury.”

Nadler claimed Kavanaugh perjured himself when someone asked him “at a committee hearing under oath” about an article in the Atlantic revealing the allegations of a third accuser, and he denied hearing about it.

The New York Democrat was actually referring to a different claim, which has been debunked, that Kavanaugh perjured himself when he denied knowing about an allegation involving Deborah Ramirez until the New Yorker published a story on it.

“The worst-case scenario — or best case depending on your point of view — you prove he committed perjury, about a terrible subject and the Judicial Conference recommends you impeach him. So the president appoints someone just as bad,” Nadler told the caller.

Nadler added that Democrats do not plan to carry out their investigation quietly.

“You can’t do it quietly because word will get out that the FBI or the committee is reaching out to witnesses,” he said.

The top House Democrat then moved on to the subject of investigating Trump, which he said would be branded as holding Trump “accountable” for his actions when in reality Democrats plan to go “all in” depending on the outcome of Special Counsel Robert Mueller’s investigation.

After Nadler arrived in D.C., he tweeted Wednesday afternoon that “Americans must have answers” as to why Trump removed Attorney General Jeff Sessions from his position.

Americans must have answers immediately as to the reasoning behind @realDonaldTrump removing Jeff Sessions from @TheJusticeDept. Why is the President making this change and who has authority over Special Counsel Mueller’s investigation? We will be holding people accountable. https://t.co/weykMuiCxm

Nadler, who has compared Russian meddling to Pearl Harbor, called for Sessions’ resignation once before in March 2017.