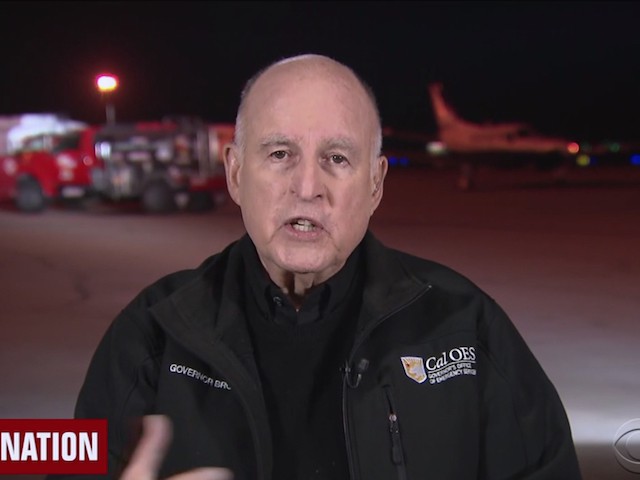 Sunday on CBS’s’ “Face the Nation,” Gov. Jerry Brown (D) said the increasing wildfires in California meant that “in less than five years” the “worst skeptics” were going to be believers in climate change.

On the California fires, Brown said, “Well, how they started is now the subject of investigation. The consultation occurs because the brush, the vegetation is so dry, and the humidity is so low. And when you have that and then the heat and years of drought, that gets it going. In paradise, there were a lot of buildings that also caught fire, and it just went from one to the other. So it’s a mixture of many things, and the president talked about how our forests are managed. That’s an element. But there is also the way the houses were built, the materials, what kind of vegetation is around, and then there’s also the changing climate and the increasing drought and the lowered humidity and water vapor. All of that is combining to create the tragic situation that we saw today in both northern California and here in southern California.”

He continued, “Where paradise is, of course, is surrounded by federally managed land. These are national forests. They’re not state parks, and they’re not private property by Californians. So it is the federal government. And the fact is that managing the forest is part of it. They are a lot denser than they were 200 years ago, but on top of that, we have a five-year drought. We have reduced rainfall. We have the vegetation and bushes and houses and trees that turn into timber, so it’s ready to explode. So there is an atmospheric element, which is part of the natural cycle, and then there is an increasing

He added, “The only way to assure the long-term forest health is not just, you know, cutting trees, it’s going to require reducing carbon emissions and eventually, sooner rather than later to zero. If we don’t do that, you’re going to see these fires not only continuing but getting worse by the year as they are. The last five years, the fires have never been this bad. This fire in Malibu is the worst we’ve ever seen. This fire in Paradise in Northern California is the worst in the history of California. So, yeah, you can mold the science, but I’ll tell you, every year it’s going to get clearer and clearer so that I think in less than five years even the worst skeptics are going to be believers.”