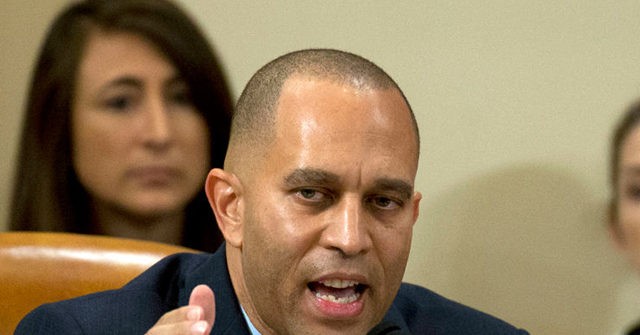 Thursday on MSNBC’s “All In,” Rep. Hakeem Jeffries (D-NY) said Congress would investigate the Trump administration for using Washington, DC police and National Guard troops to clear out protesters from Lafayette Square for Trump’s visit to St. John’s Episcopal Church.

Jeffries said the action was a subversion of the protesters’ constitutional rights of freedom of assemble and freedom of speech.

Jeffries said, “Well, the president is out of control. We’ve seen that time and time again over the last four years. But this is a new level of concern because he’s enlisting the military of federal law enforcement officials in a manner that clearly subverts and undermines the United States Constitution which clearly provides in the First Amendment, the freedom of speech, the freedom of assembly, the freedom to petition your government. This is foundational to the American experiment.”

He continued, “The president, of course, has unleashed tear gas and rubber bullets on peaceful protesters in order to create a political photo op. He is a wannabe dictator with authoritarian tendencies. Unless the good people in the military and this administration stand up, it won’t get better. It will get worse.”

He added, “We will be back in Washington next week for committee hearings, including, I understand it, the Armed Service Committee Chair as well as our House Judiciary Committee to discuss a variety of issues and conduct hearings with respect to what we see across America. Both in terms of the president’s subversion of the United States Constitution as well as the police violence epidemic that we have to address, as well. You know, fundamental to America is the notion that no one in the military swears an oath to the president of the United States. They swear an oath to the constitution, to the principles of separate and coequal branches of government, checks and balances, the independent judiciary, the free and fair press, the right to petition your government, the pre-imminence of the rule of law. Dr. King said to us that in the end, what we will remember are not the words of our enemies but the silence of our friends. If you are a friend to the United States Constitution, you need to step up right now. Certainly, Congress needs to do that, and House Democrats will do that.”