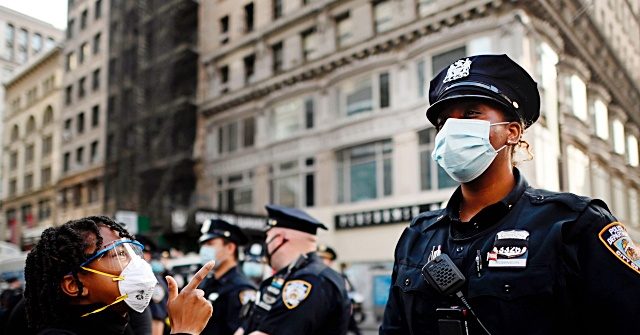 Marlow asked about the “movement to defund the police.”

Sessions replied, “It is such a fundamentally dangerous thing. We’re at a very dangerous point in American history after some 30 to 40 years of smarter policing and declining crime. We’ve gotten comfortable. We’re feeling safe. We’ve got young people like AOC and Ilhan Omar who’ve never lived through brutal crime periods, and we’re making some big mistakes.”

Sessions reflected on the relationship between crime rates and policing policies. Both Baltimore, MD, and Chicago, IL, had significant increases in homicides after implementation of left-wing and Democrat policing policies, he noted.

“Let me give you what the future would look like, and we have facts that show this,” remarked Sessions. “In Chicago, they averaged 450 murders per year for 10 years. There was a riot, an abusive situation, [and] the ACLU sued this police department. They entered into a consent decree that basically pulled the police back dramatically off the streets, reducing interactions, and having the arrests fall dramatically.”

Sessions continued, “And in one year — it took place in late 2015 — and in 2016 murders jumped from 450 to [between] 780 and 800. That may be one of the greatest increases in homicides ever seen by a major city. Why? Because the policing changed.”

“The idea that policing does not impact a city is ridiculous,” Sessions stated. “[New York City] had 2,200 murders in the early nineties. Rudy Giuliani and [Bill] Bratton and that team took over … a city under threat for its very existence, and now there are 300 murders [per year].”

Sessions went on, “Baltimore signed one of these ridiculous consent decrees — that I tried to stop — that was pushed through by the Obama administration shortly before I became attorney general. Now Baltimore has twice the murder rate of any other city.”

Sessions noted that Chicago’s volume of murders is more than twice that of New York City’s, despite being about one-third as populous.

“Now we’ve got Chicago at 700, 800 murders a year with New York [City] at 300, and Chicago is one-third the size of New York [City]. Los Angeles also had a good [police] department and had some very good successes. Harvard studied Los Angeles, and the Harvard study found that more and better arrests are what resulted in declining crime rates.”

Sessions recalled, “Former federal judge Paul Cassell studied Chicago. Why did the crime surge like it did? He said there’s only one reason: fewer police were on the streets making arrests and stopping crime in the neighborhoods. So we know how to do this. Good policing is tough, it’s hard. [In] thousands of arrests, things can go wrong, but fundamentally thousands and thousands of lives are saved when you have good policing and you support those police.”

Sessions concluded, “If you tell them not to make arrests, not to go into the neighborhoods, to pull back, they will, and innocent people will die.”